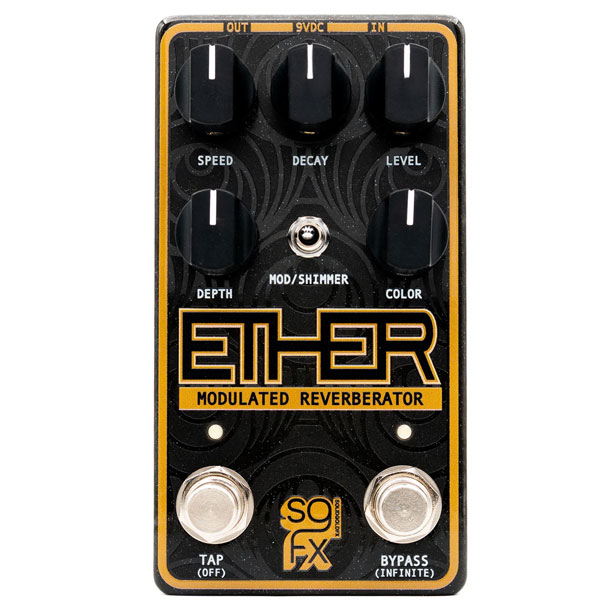 Modulation is an effect that is often found in delay pedals, but in the last few years, some of the most creative builders have been releasing reverb circuits followed by modulation, opening up a new, well-received niche with ambient leanings. The SolidGoldFx Ether is the Montreal company’s take on that effect combo.

It all starts with a cavernous, ambient reverb with long tails that can become infinite by holding the Bypass footswitch. The reverb has controls for Level, Decay, and Color, and an optional Shimmer mode that – in this pedal – sounds less angelic and slightly more dissonant, devolving with the reverb’s decay.

The reverb is then followed by a 3-mode modulation section with 3 LFO shapes whose timing can be set via Tap Tempo:

Vibrato adds a melting fluidity and washed out chorus flavour to the verb while the Tremolo can divide things up into subtle waves or absolutely chop up your tails for a more percussive decay. Finally, the Harmonic-Tremolo adds a wonderful Push/Pull character that tilts the sonic spectrum between highs and lows, all while sweeping everything in between.

Each of these effects can be applied via three different LFO shapes: Sawtooth, Sine and Special Waveforms, selectable through the centre-detent Depth control.

We added the SolidGoldFX Ether to our article about the best modulated reverb pedals.

Here’s what it all adds up to, when plugged into an instrument:

A compact modulated reverberator, Ether delivers vast ambient and shimmering soundscapes. With endless tails, the pedal is further manipulated by Tap Tempo Vibrato, Tremolo and Harmonic-Tremolo, all designed to bring you to a realm of dark, cavernous voids and eerie, yet shimmering reflections. Ambient bliss is only a stomp away.

The journey with the Ether started with a simple question. What would happen if we were to manipulate a sonic reflection exclusively? What textures could be created by heavily (or subtly) modulating a cavernous ambient reverb, while at the same time leaving the dry signal unmolested? The result with Ether is a powerful, yet versatile reverb that is designed to create hauntingly beautiful soundscapes.

At the core of the Ether is our new full-bodied ambient reverb featuring Decay, Color and Level controls, with an optional Shimmer mode. While most Shimmer reverbs aim for an angelic effect, our design team prefer things to have a little more of a twisted sonic signature, therefore we created a shimmer algorithm that has a tendency to devolve as it decays, creating a sound drenched in an Ether induced dissonant haze. The Decay control takes you from a confined space to the infinite heavens, while the Color knob allows you to make the tone all as dark or as snappy as you please. With an extended range on the Level knob, the output of the reverb signal can overtake the dry signal, for those seeking extra colourful effects.

Now let’s talk about what really sets this pedal apart from being just another reverb box – the modulation. We have equipped this compact goliath of a stompbox with 3 different modulation types, each with 3 different LFO shapes and Tap Tempo operation. The Vibrato adds a melting fluidity and washed out chorus flavour to the verb while the Tremolo can divide things up into subtle waves or absolutely chop up your tails for a more percussive decay. Finally, the Harmonic-Tremolo adds a wonderful Push/Pull character that tilts the sonic spectrum between highs and lows, all while sweeping everything in between.

So, when you’re ready for a new high take a hit on the Ether and let the sound take you away!