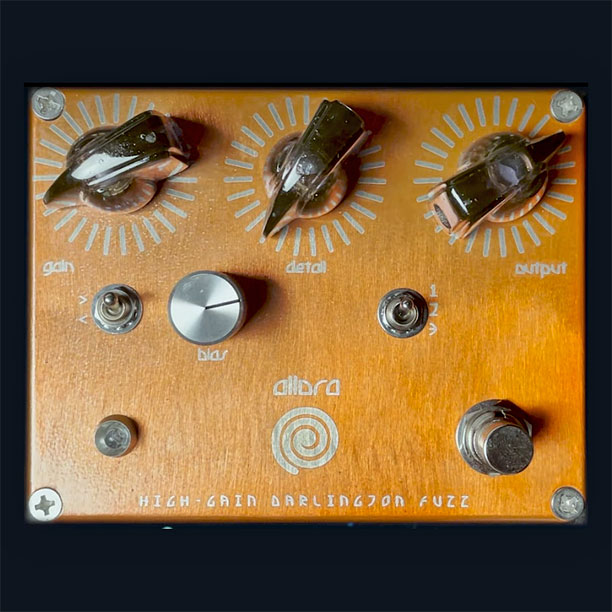 At a boutique level, building a pedal that ends up becoming a staple on many guitarists’ pedalboards is (obviously) a great achievement for any builder, but comes with its drawbacks: almost every admirer will feel compelled to let the manufacturer know what would make it even better for them.

This can lead to frustration or, in some cases, inspiration.

The Spiral Electric FX Allora High-Gain Darlington Fuzz is a fuzz pedal born out of this dialogue between producer and end-user, and more specifically out of customer requests for a higher gain version of the company’s Brute Fuzz.

This led owner and circuit designer Tom Cram to experiment with the (very hot) Darlington transistors, whose response was so different from the ones used in the Brute that it forced him to rework the entire circuit around them until the pedal took a new life of its own.

Rather than a high gain version of the Brute, this new circuit sounded – to quote Cram:

The Allora shines with loud amps and can hit them hard, but it also allows for a lot of tonal range within its “high-gainessness,” thanks to the Focus Toggle, which can shave off some low-end to make it play nice with an already dirty amp channel, and the three-way Texture toggle which activates 3 different diode modes:

3 – Special – a setting that scoops the lower end allowing a better transition from fuzz to clean tones using the volume knob. Great for feedback

But enough talking, let’s hear how this beast sound!

The Allora has its beginnings in requests from players to make a higher-gain version of the Brute.  To explore this path I started experimenting with Darlington transistors.  These transistors have incredibly high Hfe measurements in the 10’s of thousands, as opposed to the low-to mid hundreds of normal transistors.  I’m using two Darlington’s in the Allora, and this amount of gain required substantial reworking of the input, output, and Detail controls;  as well as reconfiguring the overall transistor arrangement (BC108C, BC549, MPSA12’s, 2N5089).  I also opened up the Bias control to increase gating so that you can control noise, or not!

However, all of this experimentation and adjusting did not yield a “higher-gain version of the Brute,” it turned into – something else.  The Allora is more compressed, wilder, ruder, feeds-back, sputters, sags, spits, woofs, growls, and even horns(?), like no other fuzz I make.  Some settings remind me of a Muff, other settings remind me of a Buzzaround.

The Allora LOVES to be paired with a loud amp, and the generous Output allows it to hit the front end of an amp pretty hard – unity is right around noon.  The Focus Toggle allows you to shave off some low-end to make it play nice with an already dirty amp channel.  The three-way Texture toggle has the following options:

The first setting uses diodes that Christopher from SHOE turned me on to.  They are common silicon diodes, but the breakup is nice and smooth with a little added compression.  We use these diodes on the Red Spiral.

The second Blower setting is something that I started doing on a few one-off that I have come to love.  It is just the straight raw tone of the transistors clipping.

The third setting is a part that I discovered that scoops a tiny bit of the lower-mids, this allows for a smoother tonal transition between fuzzy and “clean” when using the guitar volume knob.  At higher-gain this setting tends to resolve to the upper octave, which is great for feedback.

The Allora sounds “hot” to me and for some reason that brings to mind the color orange.  I found a nice coppery translucent orange powder-coat and shot that over a hand-brushed top.  There is a nice depth and texture in it that changes with the light.  We paired the top with some sweet custom smoky purple Deco Wedge knobs hand-made by my wife Dawn.  I designed some simple laser-cut graphics that don’t interfere with the top color/texture and the knobs.

A note or two about the expanded Bias control:

I increased the range on the bias to help control some of the inherent noise/oscillation that comes with the increased gain of the Darlington transistors.  Right around 2:00 on the Bias you can hear the gating kick-in and the noise floor is drastically improved.  If the gating cuts-off your sustain too abruptly, try moving the Bias back just a little, you will find a sweet-spot depending upon your guitar pickups that is a good balance between gating and sustain.

Or you can just mess with the Bias to find all kinds of crazy sounds, noise be damned!  For horn-like sounds where your pick attack is completely removed, try the 4:00 range on the Bias.  For aggressive, more OD-ish sounds keep the Bias in the 11:00 range.

Ironically, one of my favorite settings on the Allora is lower-gain.  Set the Output in the 3:00 range so it acts like a boost, then bring up the Gain and Bias to around 10:00-11:00 to “fill-out” the sound.  This setting sounds phenomenal with an amp channel that is on the verge of break-up.  I use this setting a lot on both my AC30 and Thunderverb 50 to get a great clear rhythm grind.

To sum up, the Allora is a bit different from the fuzzes I normally gravitate toward.  It isn’t “open” or “transparent” in any way.  It wants to do what it wants to do, and you kind of have to ride the wave.