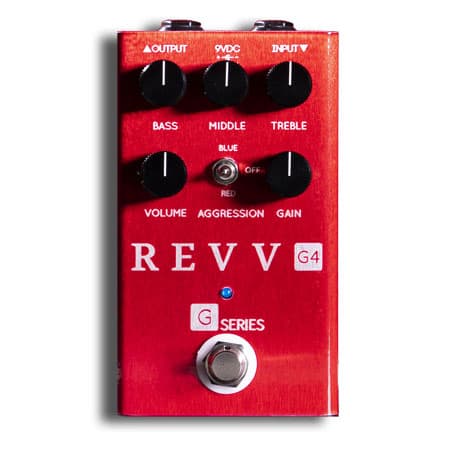 Manitoba’s REVV Amplification has built a solid reputation designing and building high quality boutique guitar amps, and have expanded to the pedal market in the spring of 2018 with the (purple) REVV G3 Distortion, which instantly found lots of love among many pedal videographers.

The Canadian builder surprised everybody by releasing also the (red) REVV G4 over the Christmas holidays, a distortion featuring the same exact controls as the G3, but – of course – a slightly different palette of sounds.

The G4 is the pedal version of the red channel of the company’s 120 Generator tube amplifire, which has more gain and saturation than the purple channel offered by the G3.

As dynamic and tight as the G3, the REVV G4 is a pedal that works wonder for sludge medal folks who like to drop their tuning (see Ryan Bruce’s video below).

Revv’s Red Channel 4 is a thick gain monster that still has the nuance to cover oldschool tones. The G4 is an amp-voiced pedal based on this tone used by premier touring & recording guitarists worldwide.

Applying feedback we’ve received from the G3 – we’ve developed the polar opposite to its surgical, mid-forward Purple Channel voicing. The G4 is a great  place to start for thick saturated amp-like tones & a complement to the G3 or any existing rig.