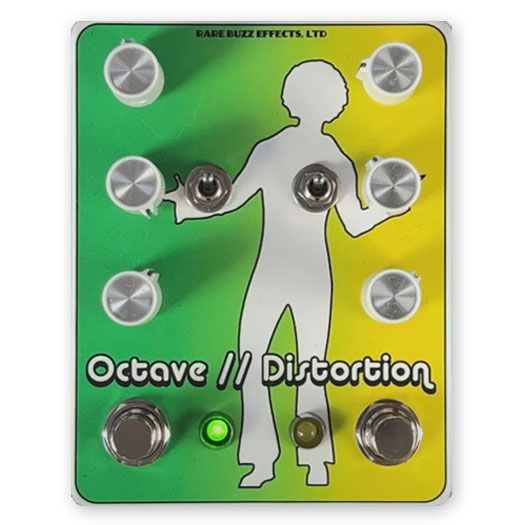 The Rare Buzz Effects Octave Distortion is a combo pedal that marries the company’s 1970 Distortion and 1970 Octave pedals.

The two effects feature separate controls and footswitches, which allow to play them separately or in series (Octave into Distortion).

The three knobs for the Octave are:

Gain: level fed into the octave circuit + acts as a buffer for the mix control.
Octave: adjusts the amount of octave signal in the mix.
Boost: controls the  output of the octave effect.

The three controls for the Distortion are:

Here’s how it sounds!

The 1970 series octave // distortion: enjoy the 1970 octave and the 1970 distortion, together in a single enclosure. With a boost, analog octave, and classic high gain distortion circuit in one box, this combo is reminiscent of that popular pedal that came to life a few years back – without costing you an arm and a leg. Bright green and yellow gradient livery with complimentary leds.

The octave // distortion is a booming platform for garage rock, doom metal, and more. This dual pedal features the 1970 octave feeding the 1970 distortion, all housed in a single gradient enclosure. With both effects active, the internal signal chain is boost into analog octave into high gain distortion – a driving lead tone at home in any mix. The two effects can be used independently – pair the octave side with other dirt, or use the distortion side for your dirt tone.

Gain: controls the amount of boost fed into the octave circuit and acts as a buffer for the mix control.
Octave: a full range blend control that adjusts the amount of octave signal in the mix.
Boost: adjusting this setting changes the final output of the octave effect.
Diodes: switches between germanium diodes (up) for a more traditional octave sound and schottky diodes (down) which has synth notes.
Distortion: adjusting this setting increases the overall gain of the circuit that feeds the clipping stage.
Filter: this control is a variable low-pass filter used to control the tone of the effect.
Level: adjusting this setting changes the final output of the effect. It gets loud!
Voice: this switch selects one of the three diode pairs used in the clipping stage. In the up position, traditional silicon diodes are used. In the middle position, leds are used. In the down position, schottky diodes are used.
The entire 1970 series features true-bypass switching and premium parts. Housed in powder-coated, uv-printed enclosures.