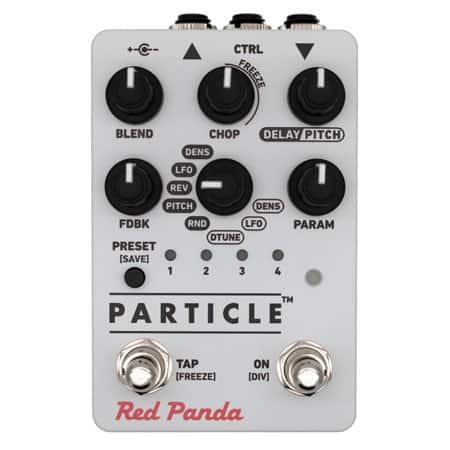 V2 of the Red Panda Particle Granular Delay sports completely rewritten firmware, as well as high-performance 32-bit processing and conversion. It runs at a higher sampling rate, with more headroom and lower noise than the original and… it has Stereo In and Out!

Interactive controls mean a small change can make a huge difference in tone. It offers features like presets, tap tempo, and momentary effects like freeze.

Additional parameters are available via USB Midi and it does presets (4 on front, 127 via MIDI).

We added the Red Panda Particle to our lists of Best Glitch Pedals and Best Multi-Mode Experimental Delay Pedals.

See more of our pedal demo shot at NAMM 2019 with 60 Cycle Hum here. We also have a list organized by kind of effect in two pages here and here.

At our November 2018 Los Angeles Stompbox Exhibit, on Red Panda’s pedalboard we noticed a slightly different version of their renown Particle Granular Delay.

A quick internet search revealed that the Detroit based builder had been sharing the news that they were working on a new version of the pedal, which will be launched – after some delays – at the 2019 Winter NAMM show.

We took this opportunity to ask the company’s “device creator” Curt Malouin a few questions about the new version of this very popular pedal.

V2 of the Particle is based on the same DSP platform as the Tensor, does that mean it’s a complete redesign from the ground up?

The hardware is completely redesigned, and an updated version of the Tensor platform. The Particle v2 uses a modern 32-bit processor and a high-performance ADC/DAC. It runs at a higher sampling rate, with more headroom and lower noise than the original Particle. The firmware was completely rewritten as well, to take advantage of the new processing power. I wanted to keep the immediacy and character of the original, with improved fidelity and wider control ranges. It can also do more traditional granular processing with dozens of simultaneous grains, and you can combine the different modes.

This is your first “V2”, what new challenges did this experience of improving an already successful circuit bring to the table?

There is always a balance between keeping what made the original interesting and easy to use, while updating it with new features. The original Particle used the Spin FV-1 chip, and a lot of its character comes from having to find clever tricks to do granular processing and reverse delays on the FV-1 (this was in 2010). My goal was to keep the Particle v2 as intuitive and approachable as the original, while giving more options to musicians who want to dig deeper. The hardware is much more complex, so a big challenge was finding ways to reduce the manufacturing costs to keep the price below $300 USD.

What made you think of working on V2 of the Particle rather than other pedals on your line?

I designed the original Particle in 2010 and released it in 2011. It is amazing to hear what musicians have done with it, from experimental noise music to melodic pop. The Particle has been used on a lot of albums, but is a bit of a challenge to use live. The controls are very interactive, and a small knob movement can make a huge difference in the sound. So my main focus was making it easier to use on tour, by adding presets, tap tempo, a freeze footswitch, and fixing some of the quirk that some people found annoying.

You announced the new features of the V2 in June through this Gear Page post, has anything changed since then, besides the release date?

That list is still accurate, but there are numerous small improvements that we have not announced yet. One reason the release date changed is that the cost of many of the components we use increased, and in order to avoid raising the price we invested in making our manufacturing more efficient. Another reason is simply that most of my time is spent running the business, and I never have as much time to do engineering as I would like.

What’s the new feature people seem to be most excited about?

What will the Freeze footswitch do, exactly?

The chop/freeze knob sets the amplitude threshold for capturing live input. The input signal plays through when the input exceeds the threshold. When the input level drops below the threshold, it starts repeating from the delay buffer instead. This allows you to catch the beginning of each note and repeat it, create drones between notes, or splice new notes into a loop. The footswitch allows you to freeze the buffer manually at any time.

Depends on how much sleep I get between now and then.

Particle V2 will be presented at NAMM, in the meantime, enjoy this classic Knobs video of it’s older sister!