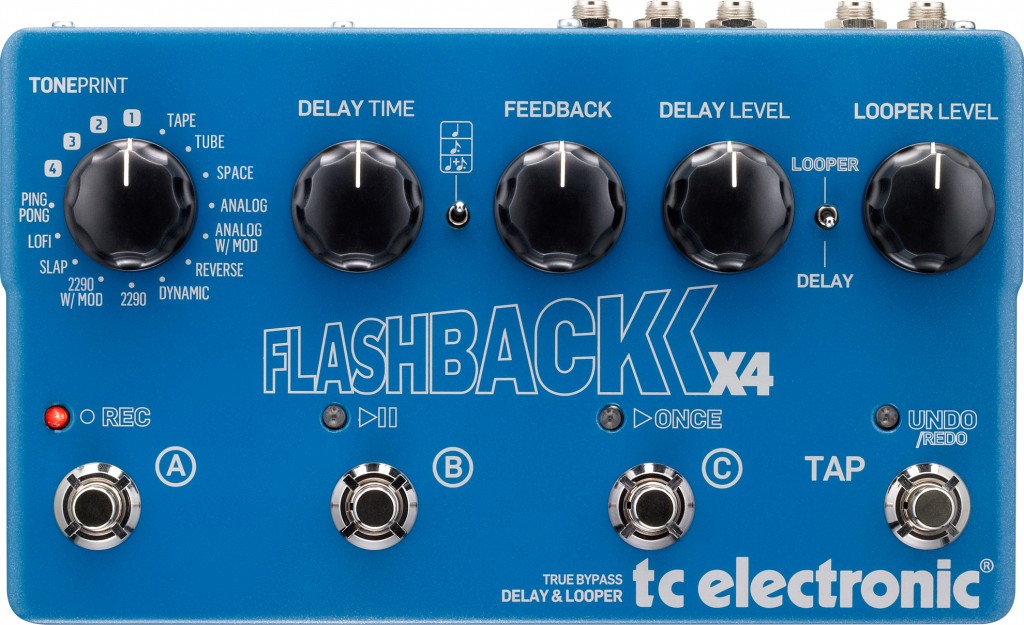 Delay is an effect in which the input signal is recorded to a storage medium then played back some time later. The amount of time it takes for the signal to be played back is typically variable and often times the signal is fed back into the signal path so that you keep getting fading repeats that simulate an echo. The early means of storage and playback were tape machines playing tape loops of various lengths with controls for adjusting the record and playback heads so that the delay time could be manipulated to fit the tune. The first delay machines were commercially available in the fifties.

We’ve come a long way with delay since then and TC Electronic has been one of the industry front runners in the field , best known for their studio classic 2290 Dynamic Digital Delay rack unit. The unit on my bench today is an extremely modern cousin of the 2290 and is called the TC Electronic Flashback X4 Delay/Looper. It is an extension in concept and design of the the Flashback Delay stomp released some time earlier. The X4 adds 3 additional stomp switches, 16 as apposed to 11 delay types, the ability to store 3 presets, tap tempo, and MIDI just to name a few key differences. It’s encased in a wonderful blue enclosure, comes with some non-slip rubber pads in case you don’t want to put it on your pedal board, as well as a power supply and a USB cable for transferring TonePrint presets (more on these later).

The Delay Knob adjusts the amount of time it takes for the recorded sound to be played back again. The range of time varies with each mode but extends up to 7 seconds in most modes. I did notice that the values increase exponentially after going past the 3 o’clock position. The Subdivision Selector Switch allows the user to divide the beat into different values based on the delay time. For example, the first position is quarter note. This switch position will produce a quarter note delay based on the delay time set. The other two positions are dotted eighth as well as a combination of quarter note and dotted eighth note, the latter in which can create some interesting patterns. The Feedback Knob controls the amount of signal that is fed back into the circuit which produces the sound of multiple echoes. This is what can make the delay sound cavernous and the more you turn this knob clockwise, the more chaos instills. The Delay Level Knob simply controls the amount of delay present in the mixed output signal. If you turn it all the way down you’ll only hear the dry signal. One of the major enhancements we’ve seen in a delay stomp is the inclusion of a Tap Temp Footswitch. It makes it so much easier to sync up the delay with the band. If it starts to get off you can always re-tap. This, in conjunction with the Subdivision Selector Switch , allows you to be very creative while staying in sync live.

Tape: What a beautiful word. I love tape and I love this delay mode because it is representative of the Tape Delays of old. It sounds really warm with the repeats fading softly into oblivion. The delayed signal also incorporates a little tape wow and flutter for authenticity.

Tube: Tube extends the tape delay concept even further toward the vintage side by emulating Tube Tape Delays of yesteryear. This setting seemed to be even warmer and repeats seemed to have more even order harmonics that make for a very pleasurable decay. Super vintage sounding.

Space: This mode emulates an old Roland Space Echo. One of my personal faves, when you turn the Feedback Knob the oscillations get way out of control in a good way!

Analog: This type faithfully reproduces the sound of an analog bucket brigade delay. Every repeat quickly fades to grey.

Analog w/Mod: This type is very reminiscent of a Deluxe Memory Man and imparts a bit of chorus into the delayed repeat for some post rock joy.

Reverse: This is the best reverse delay I’ve heard. If you turn the Feedback Knob all the way down you hear only the reversed signal, very cool for psychedelic vibes.

Dynamic: This delay type is great for the scenario when you are playing rhythm with delay but then want to play a solo or some quick riffing in between. Basically, when you play the delay volume swells down. When you sustain notes the delay rings out like normal.

2290: This is a perfect recreation of the TC Electronic 2290 Dynamic Digital Delay rack unit from 1985. The unit is still highly sought after and coveted by many enthusiasts. If character is crisp and clean.

2290 w/Mod: They say this is the delay sound used by U2’s Edge. It’s apparently the 2290 run through 3 chorus pedals. Sounds luscious and super fun when experimenting with the Subdivision Selector.

Slap: Slap is another one of my faves because it does such a great job at nailing the country slap sound. If you are a fan of really short delay spank then this is your mode.

LoFi: Another fave, because I like the dirty delay tones. One thing I really liked about this mode is when you changed the Delay Time Knob slowly with the Feedback cranked you could get some really stuttery grainy tones that would work well for ambient sound design.

Ping Pong: This mode sends the signal from right to left channel in stereo mode. I also found this mode to be really fun in mono; with the Feedback cranked for machine gun like repeats.

Then there is this thing called TonePrint. The idea is that TC Electronic came up with a concept to get tones designed by industry pros into their effects. You can download tones created by industry folks directly from TC’s website and transfer them to your device via USB. Alternatively, you can get the free TonePrint app for your iOS or Android device and beam the tones directly to the device through your pick-ups. How rad is that? The X4 comes preloaded with 4 TonePrints, but you can override them in the event that you want to download different TonePrints from their site. Super techy!

In Looper Mode you can record, overdub, play, pause, and undo/redo your parts. This can be done dry or with delay. The Looper captures the sound post-effect so you can change the delay settings every time you overdub a new part. Once switched to Looper Mode, the delay pesets are not available and the delay turns into a “what you see is what you get” situation. The only control that the Looper has other than its transport controls is a Looper Level Knob. This knob allows you to control the level of your recorded loops. One of my favorite features of the Looper is the ability to hit the Undo/Redo Switch to allow for bringing in and taking out the last part you recorded on queue. You could essentially build your rhythm section by overdubbing and then record a riff that you bring in and out during the song to make for a complete composition.

MIDI is implemented into this device but its function is not extremely deep, not necessarily a bad thing. You can override the delay time by sending MIDI clock to the MIDI in port. The other use for MIDI would be to change presets via MIDI program changes. This could be very handy if your set is being driven by a computer as many of the bigger shows are today.

One thing I haven’t mentioned yet is that you can save and store up to 3 presets. After dialing in that perfect tone all you have to do is hold down one of the first three footswitches for more than 2 seconds and the light will blink and the preset will be saved. TonePrints will save as part of the preset but it won’t overwrite the TonePrint style slot. So you could technically have up to 7 TonePrints at any given time.

Needless to say, I really liked this pedal and plan on keeping it on my pedal board. I really appreciated that it didn’t have any LCD displays but still seemed to contain a deep feature set. Its price is right and the sound and exclusivity of the 2290 model is unique and uncompromising. Extra credit goes to the Lofi, Space and Ping Pong delay types, as well as the Looper and Subdivision Selector Switch. Great delay from a great company. –Gus Green