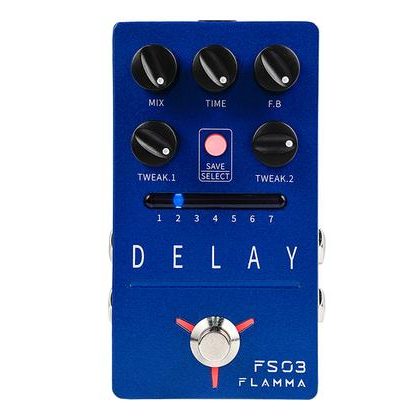 Chinese company Flamma burst into the pedal scene early this year (2020) with some incredibly affordable and well-designed multi-mode stereo pedals in the time realm (we already wrote about their Reverb and Ekoverb).

The FS03 is their delay + looper, and just like the other two devices, it features 7 modes (#7 is the looper) delivering a maximum of 2 seconds of delay. The two knobs on the bottom row allow you to tweak parameters that vary according to the selected mode, while the top row controls Mix, Time and Feedback. Each mode can be saved into a preset (one preset per mode)

The seven delay algorithms are the following:

Tap Tempo and Trails on/off functions can be activated by holding a combination of buttons while turning the pedal on.

Featuring 6 delay effects and a built-in looper with an 80 second capacity, The FS03 is designed to be a delay effect experimentation station in a compact, affordable package. Two “Tweak” knobs let you control different parameters which are unique to the selected effect. Combined with time, feedback, mix, and tap tempo controls, each delay selection provides for a staggering amount of effects in such a tiny pedal. Each effect’s parameters can also be saved to their own preset save slot to be summoned later.