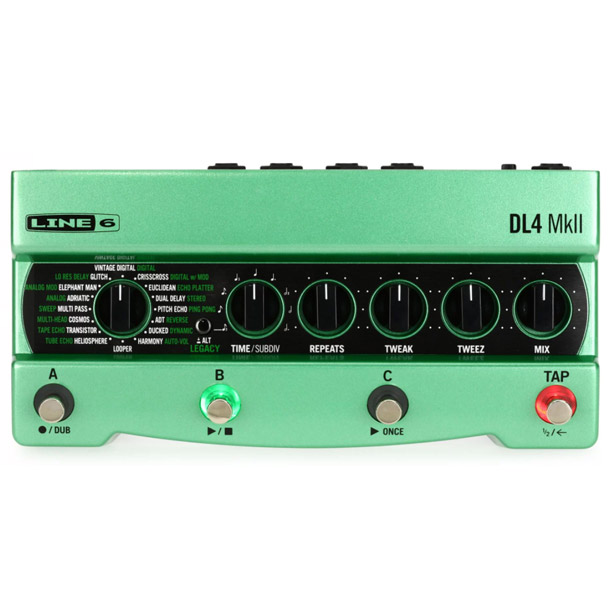 Well, we didn’t see this one coming! The new Line 6 DL4 MkII.

The original DL4 dates back to 1999 and it’s a pedal that pretty much changed the way people thoughts about delay pedals. It was the first multi-mode delay that claimed to be able to model (i.e. simulate) the character of several legendary delay and echo effects from the past, from tape to digital. It spurred a race of delay workstations whose results are well documented in our article about multi-mode delay pedals.

Notwithstanding its age and the wild leaps in pedal technology in the last 23 years, the original DL4 is still used by many guitarists today, so this MkII version of it is bound to spark a lot of interest.

While it may be a little skinnier, the DL4 MkII doesn’t look one bit smaller than the original, and – unsurprisingly – it retains most of the functionality and all of the modes of the original, in some sort of “don’t break it if it ain’t broken” kind of approach.

That said, the MkII takes thing one step further with

If you are wondering what delay modes it includes, here’s a screenshot that will quench that first: 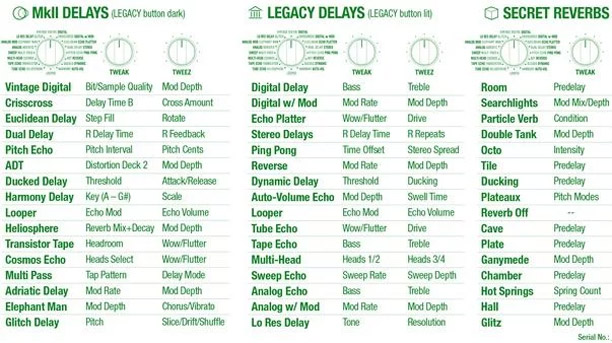 Check out the first videos of the Line 6 DL4 MkII Stereo Delay Modeler/Looper, below, we added it to our comprehensive article about the best multi-mode delay pedals.

[Wanna get this baby and be supportive? Buy it through our Sweetwater affiliate program – at no extra cost.]

Delay Modeler
The DL4™ MkII includes everything in the original DL4 Delay Modeler, while introducing 15 new MkII delays drawn from our HX® family of amp and effects processors and both 4-Switch and 1-Switch loopers with up to 240 seconds of record time (expandable to several hours using an optional microSD card). There’s also an XLR microphone input, MIDI In and Out/Thru connectors, heavy duty footswitches, three bypass options, and a jack for connecting an optional expression pedal or two additional footswitches. The DL4 MkII is also smaller and lighter than the original, making it an even more appealing choice for modern musicians.

DELAY
There are 30 delays total: 15 new MkII delays drawn from the HX family of amp and effects processors, 14 original DL4 delays, and Echo Platter, taken from the rackmount Echo Pro.

CONTROL LAYOUT
DL4 MkII utilizes the same layout of knobs and footswitches as the original. Pressing the Legacy button converts DL4 MkII into a DL4.

LOOPING
The 4-Switch Classic Looper and the 1-Switch Looper operate in either mono or stereo and may be positioned before or after other effects.

FOOTSWITCHES
The footswitches select presets A, B, and C. When the Looper is active, they select the Record/Overdub, Play/Stop, and Play Once functions.

XLR MICROPHONE INPUT
Connect a dynamic microphone to the XLR input for vocal (or acoustic instrument) processing and looping, and adjust the gain using the Trim control.

EXTERNAL SWITCHES
Connect up to two assignable external footswitches, an expression pedal, or one of each.