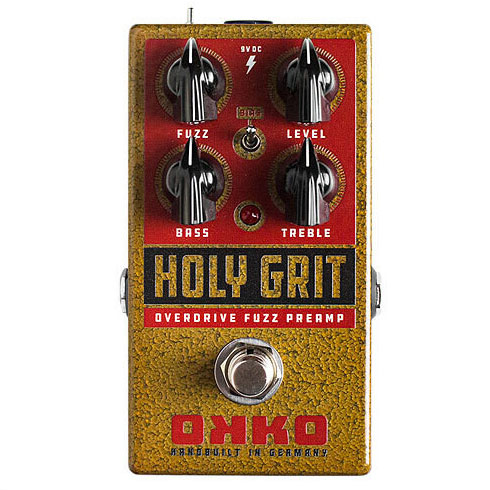 Built by hand in Germany, the OKKO FX Holy Grit is an original circuit vaguely inspired by vintage fuzzes like the Fuzz Face and Tone Bender that can produce a variety of tones from gritty overdrive to low gain fuzz or vintage preamp.

Rather than faithfully recreating the tones of those units, the Holy Grit is a modern pedal that complements their raw and complex texture with the clarity and dynamic response of the best overdrives.

Employing a set of matched low gain silicon transistors, the Holy Grit is voiced between germanium warmth and silicon presence, and features a pre-gain Bass knob and a post-gain Treble one.

A BIAS toggle selects one of three bias settings (individually set for each pedal):
• UP = high headroom setting, least amount of fuzz and compression, tight and precise
• MIDDLE = the “almost too low“ bias – dirty, buzzy, can get into velcro fuzz territory… fun!
• DOWN = “the golden middle“

There’s also a Buffer toggle on the back side of the case that allows you to make the circuit unbuffered for a more resonant tone and better cleanup, although the pedal needs to be first in the chain.

Take a listen to the OKKO FX Holy Grit in the video below.

Gritty overdrive, low gain fuzz, vintage preamp – no matter how you call it, the Holy Grit combines the clarity and dynamic response of a great overdrive with the raw and complex texture of a vintage fuzz. The intuitive controls let you dial in anything from cleanish boost with a little grit to full-blown vintage „amp on 11“ sounds. Plug it into a clean or driven amp, stack with boosters, overdrives or fuzz pedals, Holy Grit will deliver – for guitar, bass, keys or whatever you want to spice up.

The circuit is based on the classic Fuzz Face/Tone Bender but heavily tweaked into something else. We’re using a set of matched low gain silicon transistors here (parts numbers may differ from one unit to another), voiced between germanium warmth and silicon presence.

FUZZ… well, you know. Level of distortion. Set low for boosting overdriven amps or dirt pedals and work your way up to see how far you can go.

LEVEL, as expected, controls the output volume. Plenty of volume on tap, even with the Fuzz knob set to minimum.

BASS is a pregain control so more bass = more fuzz. Play with it and you’ll find the perfect balance between tight/precise and bold/buzzy.

BIAS TOGGLE selects one of three bias settings (individually set for each pedal):
– UP = high headroom setting, least amount of fuzz and compression, tight and precise
– MIDDLE = the „almost too low“ bias – dirty, buzzy, can get into velcro fuzz territory… fun!
– DOWN = „the golden middle“

BUFFER TOGGLE
UP = buffered mode. Don’t worry about the placement in your signal chain, just activate the HG’s special buffer and you’re set. Gives a little extra edge and presence in the mix compared to
DOWN = unbuffered mode. If you prefer the classic way, just connect your guitar straight to the HG without the buffer. Slightly darker, more resonant tone, better cleanup with the guitar volume.