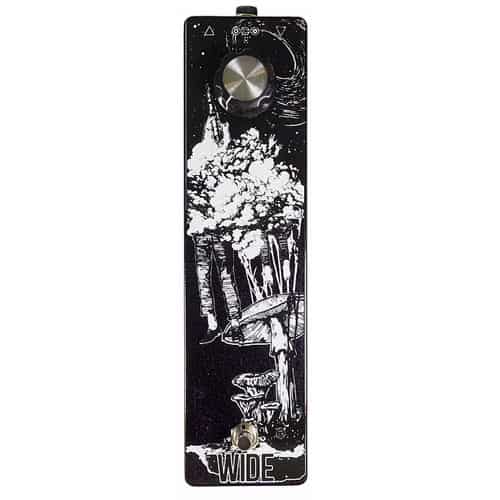 Probably the longest and skinniest-loooking pedal out there, the Wide by Pine-Box Custom is a fuzz with FIVE transistor gain stages and plenty of hidden features.

Yes because while the pedal only has one knob (that gives you more or less fuzz), there are several tonal controls under the hood, as well as bias and pre-gain controls that allow deep personalization of the fuzz tone.

The Pine-Box Customs Wide is part of the company’s limited edition The Wild Series. Check out the video, below.

‘WIDE’ is the final installment in “The Wild Series!”

With ‘WIDE’ there is one central theme. Oversized.

The goal for “The Wild Series” was more of an artistic goal of mine. I wanted to make a pedal  collage of sorts combining different artwork, different circuits, and an overall different tonal chemistry. Not only did I need to create 4 different pedals, but I needed them all to work together in harmony and I needed their artwork to be able to flow as one. With this in mind, I wanted the price to allow the user to collect all 4 and really understand what this project is about! So, “The Wild Series” was created. Tall, Deep, Far, and Wide are a passion project of mine and I am extremely excited to bring you the final chapter.

Oversized. Not only is the ‘WIDE’ enclosure sized extremely above average, the circuit is compromised of FIVE transistor gain stages that were combined to have the ability to destroy any amp it meets. While parts of ‘’WIDE’ can be found amongst its predecessors, it is the 4th and still a unique circuit. There are tonal controls as well as bias controls internally that will allow you to set the pedal to YOUR exact tastes. In addition, we’ve added a pre-gain control for the first set of transistors!

Made in a small batch of 25 just like the rest!