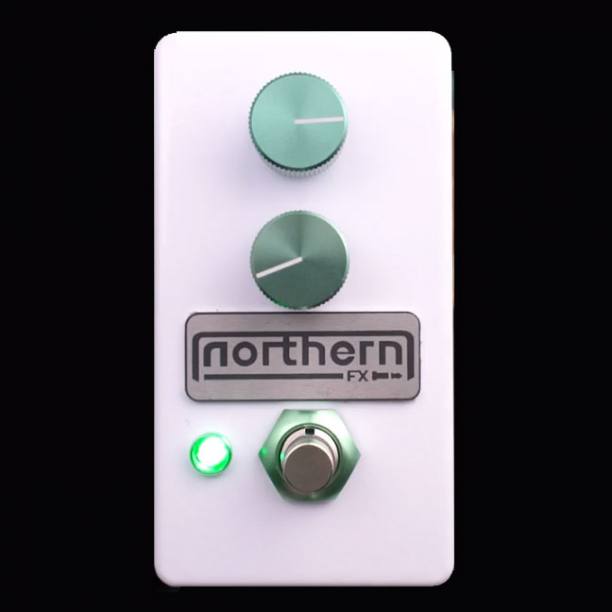 The Northern FX Rangemaster is a modern take on that venerable vintage circuit originally manufactured by Dallas, which features a mix of original and updated components within a more pedalboard-friendly enclosure, with the single NOS black glassed PNP germanium transistor providing the grit.

Check out this great videos by Eric Merrow that also explains why the Rangemaster became such a popular pedal.

OC75 Treble Booster – Rangemaster Style Germanium Pedal with top quality components.
This pedal is based on the classic Dallas Rangemaster Circuit that was popular back in the late 60’s and early 70’s. It boosts the higher frequencies of your guitar’s signal for a tighter more focused sound. Great for driving a tube amp or in front of your favorite distortion/drive pedal. It adds sustain, harmonics, and some nice grit from the single NOS black glassed PNP germanium transistor biased to measure -7.0v on the collector. It also reacts well to picking dynamics and cleans up nicely by lowering your guitar’s volume knob. The pedal has a rotary switch which selects between 8 different tone options including the Rangemaster standard. First position is a bit more trebly than Rangemaster standard, second position is the Rangemaster standard and the others are gradually more bassy. This makes the pedal very versatile and easy to stack with overdrives and fuzz. Clean well too!
This pedal’s circuit contains a voltage inverter which enables you to use a standard (Center Negative) 9V adapter.

It’s recommended to disconnect the input jack when not using
the pedal to save battery.