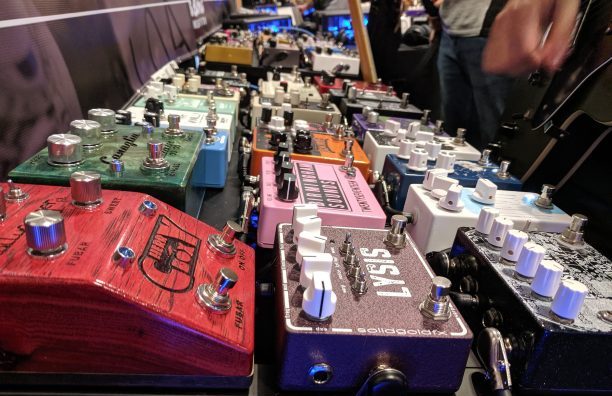 The Summer NAMM show is probably one-tenth the size of its winter sister, but it’s still a relevant show for guitar gear, and many pedal manufacturers still time their releases to coincide with this Nashville-based event.

Here’s a quick recap of the new pedals we saw at this show, keep checking in the next few days for updates.

The BOSS SY-1 is a polyphonic, note-tracking pedal that offers the same technology as the SY-300 but in a smaller case, sporting 11 sound types, each with 11 variations, for a total of a whopping 121 synth sounds.

The BOSS RC-10R represents an update to the looping station with a built-in drum machine featuring 16 kits and 280 preset rhythm styles. Check out the video by Premier Guitar, below.

Eventide didn’t unveil any new pedal, but did announce a new effect for their H9, an harmonic tremolo tuned for guitar called Harmadillo.

Korora Audio, a small pedal builder with edgy ideas, showed for the first time their second effect called Merlo, a tremolo with three waves and an interesting coloring circuit.

Cusack Music has brought to Nashville a fair amount of new design split between their own brand, Mojo FX, which they own. The three new pedals from each brand are the Cusack Meta Plexi, a Marshall style amp in a box with extra lead footswitch; the Mojo Hand FX RVT, a two modes Reverb + Tremolo circuit; and the Mojo Hand FX Park Theatre Echo, a limited edition echo whose profits go towards a fund to help local theater in Holland, MI.

Hosted in the Cusack Music booth was also Hunted Labs, which showcased two new fuzzes, one of which (the Carolina Reaper) is a dual circuit Fuzz + Overdrive, with separate controls and dedcated footswitch.

The stompboxes by MTL Assembly might not be for everyone, but they generate instant buzz among a growing number of musicians with experimental leanings.

Company owner and circuit designer Scott Monk is showcasing at our SNAMM 2019 Stompbox Booth his latest creation, which kept him busy for a couple of years now.

It’s a rather complex synth pedal with tracking, drone generation and a trigger input (among many other features). Scott says it will be shipping around the end of August – just in time for the Montreal Stompbox Expo we are co-organizing with MUTEK, called Sonic Circuits – Circuits Sonique! 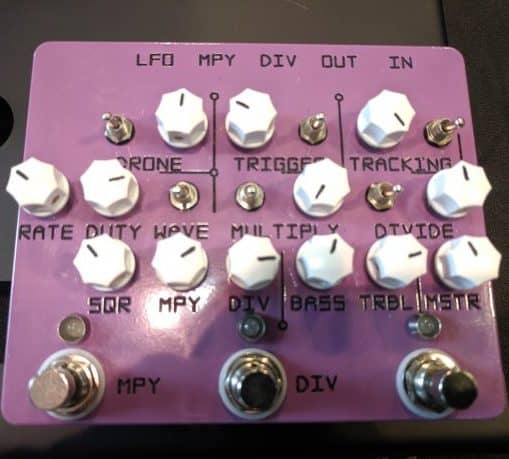 Also at our SNAMM booth, Long Island’s one man boutique manufacturer Floating Forest is showing off this monster pedal prototype which can either split one signal into three and allow different EQ treatments and routing for each, or can accepte three separate inputs and mix them together. 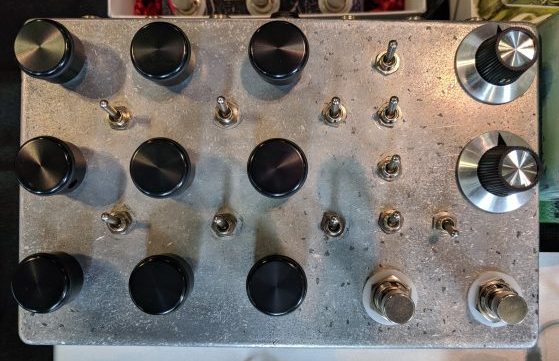 Our friends at Big Ear (previously known as Big Ear NYC, before they moved to Nashville), introduced a new, two-knob green pedal called Albie which will make your guitar sound like… the ’80s – as in, that era’s new wave, post-punk and jangle pop bands. A blend knob lets you dial back in some of the present time! 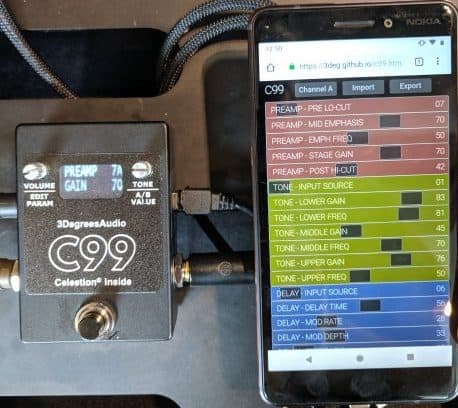 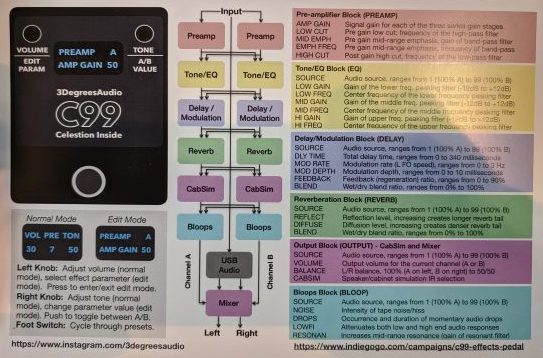 Spiral Electric FX, the new project of ex DigiTech Tom Cram, is showcasing two new designs: The Brute fuzz features Silicon BC108B transistors, a Nanolog N2, mixed with Russian 1N34A Ge diodes, and modern Si diodes on the Texture Toggle. The White is a simpler device, a boost designed to be always on, and the first circuit by this manufacturer without the Nanolog technology.

Greer Amps unveiled a new chapter in their dirt box saga: the Gorilla Warfare MkII is an updated version of their Rat-inspired distortion, an “angry, aggressive, larger-than-life and not-holding-back version of the old familiar circuit, complete with the good old LM308 chip.” There’s a video of this pedal here.

Nashville based Mythos Pedal, another manufacturer mostly focused on dirt circuits, unveiled what we believe is their first digital pedal, an echo named Oracle (pictured below), “an analog inspired digital delay with a preamp, modulation, tone controls and subdivision,” and also two other pedals: The Argonaut (a mini octave up) and The Typhon (dual drive designed for @wildwoodguitars with a MOSFET version of the Herculean V2 on one side and a flatter EQ High headroom op-amp drive on the other. 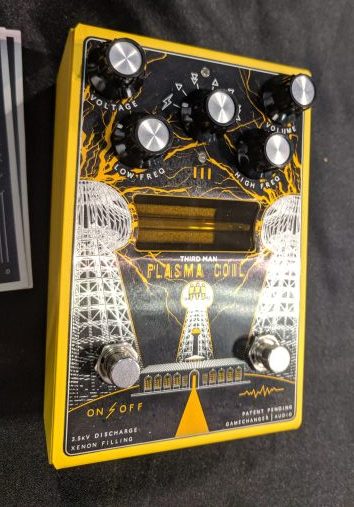 The pedal will feature an extra circuit, with its own footswitch, providing four different flavors of octave up and down effects.

Old Blood Noise Endeavors, hosted in an eye-catching white booth, unveiled MAW, a bright green, two-channel, multi-mode modulation pedal with a separate saturation circuit. It looks delicious and we can’t wait to see what it does. Each effect has its own footswitch, for a total of three. 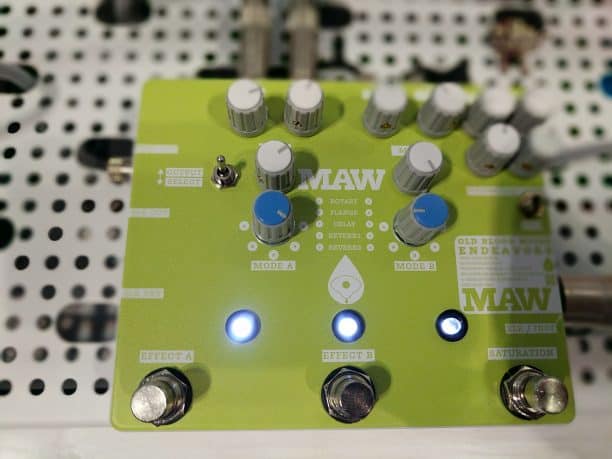 Fender can’t seemingly stop churning out new pedals: they just unveiled 6 new designs including a reverb+delay (Reflecting Pool), a filter envelope (Pour Over), a compressor + OD (Compugilist), a double fuzz (The Trapper), a preamp tube (MTG: LA) and an overdrive for acoustic guitars (Smolder). You can see them all below.

Alexander Pedals, fresh of the release of the Marshmallow (a creative pitch-shifter), displayed an unforeseen device: a modulation pedal called Neo-Matic, featuring Vintage and Modern mode and all the bells and whistles of the company Neo series.

We rarely get excited about expression pedals, but we think the guys at DB Instruments they have something interesting going on with their 4E Dual Axis Expression Pedal – not a new product, but new to us. It doesn’t just rolls back and forth but also rotates left and right, for an added foot-controlled effect, also programmable via MIDI. If you didn’t understand the former sentence, just watch this video here.