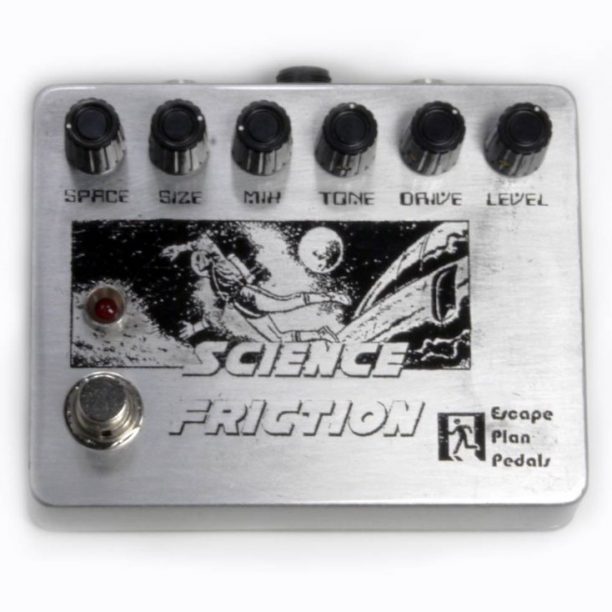 A unique pairing of not-so-complimentary effects, the Science Friction delay from Escape Plan Pedals marries delay and overdrive into a creative combination design.

The control scheme is an array of six simple knobs, making it easy to use and extremely fun to experiment with. ‘Space’ controls the time between echo repeats and ‘Size’ adjusts the number of the repeats, much like a Feedback knob. The ‘Mix’ adjusts the wet/dry blend, and ‘Tone’ is an EQ that affects the delayed signal. ‘Drive’ lets you set the input gain level of the overdrive, and the ‘Level’ control serves as the Science Friction’s master volume.

Against conventional wisdom, the circuit is designed with the dirt AFTER the delay circuit, giving the effect focus on the delay aspect while integrating the overdrive underneath it. While this might make it not for everyone, musicians into psychedelia and post-punk tones – or even classic rock style Echoplex sounds – should find plenty of inspiration in the Science Friction Delay. Come and play with it at the upcoming Brooklyn Stompbox Exhibit at Main Drag Music! – Brandon Stoner