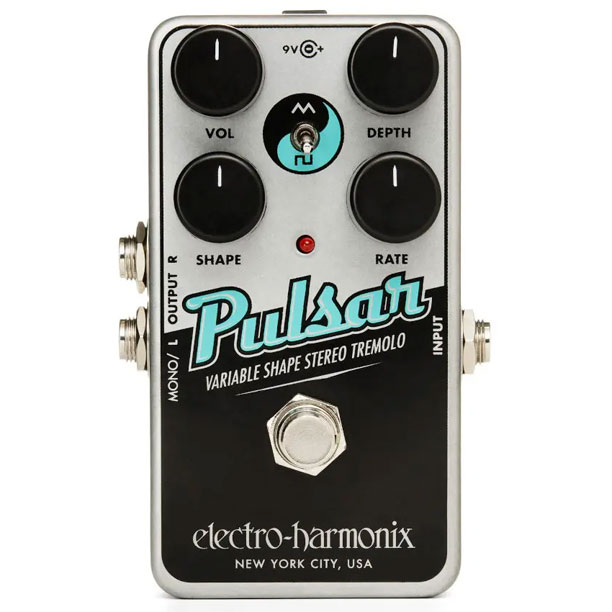 The Electro-Harmonix Nano Pulsar updates the NYC company’s stereo tremolo by shrinking its size and adding a Volume knob, always useful to compensate for the perceived signal drop when the effect is turned on.

Like the non-Nano version, it features two wave modes (Triangle or Square) that can be further modified through the Shape knob, generating anything from rising and falling sawtooth to ultra-wide stereo effects.

Another neat effect is that when you turn the Depth knob past 1 O’clock, the modulation becomes asymmetric, creating a unique style of tremolo that warps the audio signal between positive and negative phase.

Here are the videos of the Nano Pulsar.

The Nano Pulsar takes tremolo beyond the ordinary and mundane. Equipped with a collection of tremolo-modulating waveforms and the option of operating in Triangle or Square Wave modes, the Nano Pulsar is a tremolo/panner treasure chest. In mono, it’s simply amazing, or, connect it in stereo to create shifting waves of sound that surround you and fill your space with weaving, pulsating energy.

For all its power, the Nano Pulsar’s layout is intuitive and using it is easy. There’s often a perceived volume drop with tremolo when the effect is engaged so we’ve included a Volume control. It allows a player to fine-tune their output level when the effect is on, and is a very useful addition.

The Nano Pulsar’s Depth knob adjusts the amount of tremolo applied to the signal. Past maximum (around 1 o’clock) the modulation becomes asymmetric and warps the audio signal between positive and negative phase. This creates a unique style of tremolo which sounds great alone or can be used in combination with other effects like the Oceans 11’s Shimmer patch to produce compelling synth-like sounds and textures.

The Rate knob provides a full range of speed adjustments for the tremolo or pan effect, and when you start to max out the Rate and Depth controls you enter ring modulation territory for a surreal sonic joyride!

Unlock a world of advanced sound shaping and control. Create tremolo and panning effects that go from sublimely beautiful to downright shocking. The compact Nano Pulsar will be your do-it-all, go to pedal for all things tremolo and panning.

Compact, yet powerful tremolo/panner pedal packed with effects
Run it in mono or in stereo for a fully immersive tremolo/panning experience
Flick the Triangle Wave/Square Wave mode switch to determine how sharp or smooth the effect will be
Select from falling and rising sawtooth, narrow and wide pulse width, or triangle and square wave tremolo-modulating waveforms to control how the tremolo morphs and evolves
Know whether the tremolo is on or off before you play a note. The Rate/Status LED pulses at the same rate the effect is modulating when the effect is engaged
9 Volt battery included, also works with an optional 9 Volt power supply
Buffered bypass