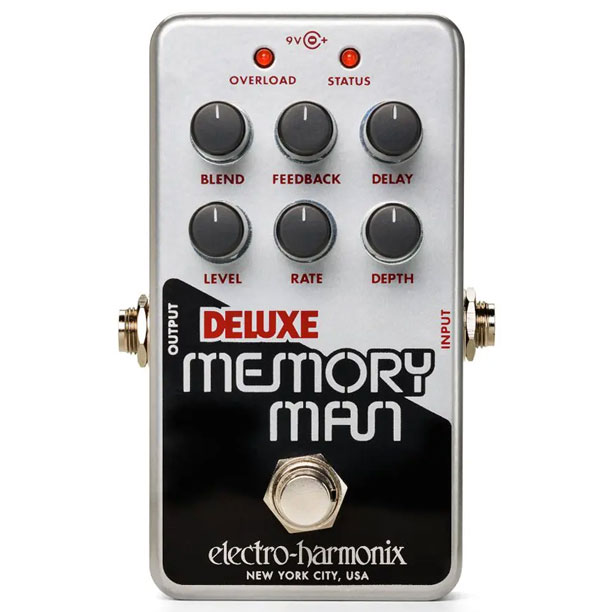 This new iteration of what’s in all likelihood the most famous delay pedal of all features a simple layout with six knobs, and delay times from 30mS up to 550mS. There are no surprises in the delay controls with knobs for Blend, Feedback and Delay – the second will take you into runaway oscillation at maximum levels.

The modulation section is controllable via a Depth and Rate knob, while an internal Tails Switch that sets whether the echoes decay naturally when the pedal is switched to bypass or if they are instantly muted.

Hear the familiar sound of the Electro-Harmonix Nano Deluxe Memory Man in the videos below.

No one does analog delay and modulation like Electro-Harmonix and the Nano Deluxe Memory Man delivers the unmistakably lush delay, chorus and vibrato of the benchmark large-format Deluxe Memory Man in a compact, pedalboard ready chassis.

The Nano Deluxe Memory Man delivers EHX’s signature analog delay, chorus and vibrato plus some updates we’ve added including both Rate and Depth knobs for enhanced modulation control. It features a maximum delay time of 550mS, an internal user-accessible switch to turn delay tails on or off, true bypass switching when the tails feature is off and it comes equipped with a standard 9Volt power supply. For over 44 years the Deluxe Memory Man has been the gold standard for analog delay and modulation. Now it’s available in an ultra-compact package!