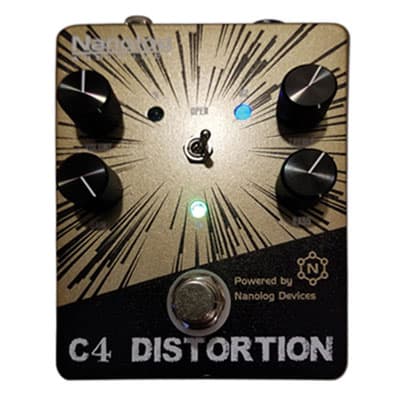 Read more about Nanolog and their Carbon Clipping Devices in this other article/Q&A, and check out the videos of the C4 Distortion below.

The C4 Distortion is designed to truly ignite the distortion potential of our carbon technology. The pedal features three different clipping options to allow the user to experiment with traditional distortion circuits, but also to experience the much broader and more explosive world of carbon clipping. The silicon position produces highly compressed and saturated tones, which can be useful in a variety of settings and recreated by almost any other distortion pedal in the market. The open setting uses no clipping component at all to produce a massive volume boost and staggering in-your-face distortion. The N2 setting is a Nanolog Device that uses carbon to creates new robust tones that have not been possible to create with either silicon or germanium diodes.

The C4 Distortion enters a new realm of crunch and drive. The carbon N2 setting pushes to a new class of clipping with its smoother current induction and warmer, more natural soundwaves. Silicon diodes in particular create harsh “tin-like” tones due to the frequency response in the high end. The carbon molecular junction housed in the C4 Distortion produces a fat, thick, and rich distortion that is full of detail and clarity. This is possible due to the Nanolog Device that is comprised of a layer of pure carbon molecules that is 8 nanometers thick, which is over 150 times thinner than the thickness of a dime. The C4 Distortion unlocks the power of carbon and quantum tunneling technology in an ultimate distorted setting.

Inside the pedal is an intense design that truly pushes the limits of current distortion technology. With a staggering amount of gain, this pedal is wired to blow with an explosive tone right out of the gate. The C4 Distortion features a two-way passive EQ band to ensure tonal flexibility and accuracy, true bypass to avoid any unnecessary coloring of tone, and volume and gain controls to dial in any or all distorted impact.

The C4 Distortion is a powerhouse distortion pedal that is fully loaded with gain and an unprecedented explosive carbon texture. Between the three clipping options and two way EQ, this pedal offers an immense dynamic range. It offers flexibility, precision, and a wider palette that exists with standard silicon and germanium driven pedals. The C4 Distortion pushes the limits of carbon clipping and explodes into a new world of power and distortion. Hold nothing back and unleash the elements with the C4 Distortion!