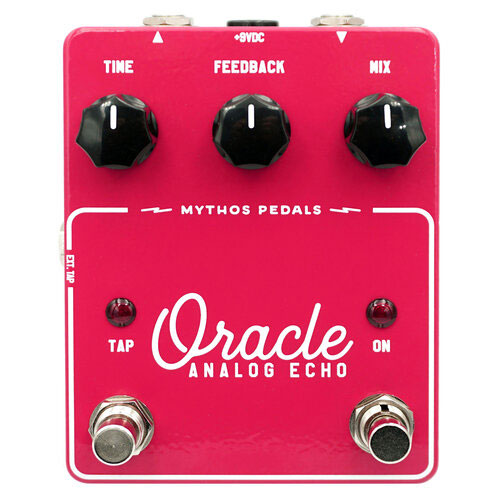 Inspired by the somewhat dark, warm sound of vintage Japanese echo pedals, the Mythos Oracle is a simple 3-knob delay built around two reissue MN3205 chips. The repeats can go up to 600ms (which can stretch even further if you use the Tap Tempo to dial in the time setting – causing the typical degradation produced by BBD at longer settings).

Here’s the stream directly from the builder. We added the Oracle to our list of Best Analog Delay Pedals.

Well it finally happened. Mythos has moved beyond just making dirt boxes! The Oracle Analog Echo is finally here. This pedal pays homage to the Japanese echo pedals that I adore but isn’t a direct clone of anything. Designed by John Snyder of Electronic Audio Experiments the Oracle is built around two reissue MN3205 chips. The layout is very straightforward and simple, the knobs are Time, Feedback, and Mix with a Tap Tempo and True Bypass On/Off Footswitches. The Time knobs allows you to get up to 600ms of delay time, but using the Tap Tempo you can push that time even further. Tapping a longer delay will begin to degrade the signal and repeats. PLEASE NOTE: The longer the delay time gets you begin to introduce noise into the signal.

The voicing on the pedal sits kind of in-between classic analog units, it’s dark without being completely muffled and lacking clarity. I worked very hard fine tuning the taper of knobs so that everything feels right under you fingers. The Feedback control goes from single repeats for slap at minimum to self-oscillation territory at 1-2 o’clock. The Mix control took the longest to get right, at 12 o’clock you’re just shy of a 50/50 split of wet and dry. Using the Oracle in front of a pushed amp works great and doesn’t require the Mix knob to be set all the way down.