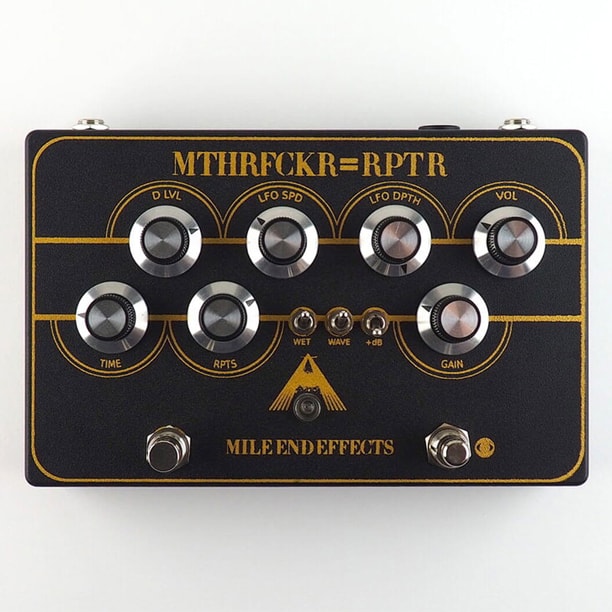 Based in Montreal, Canada (just like us) Mile End Effects is a one-dude company making some really interesting pedals.

The dude in question doesn’t share his name in the company’s “about us page” but he tells us that he plays in a band called Yoo Doo Right, which sounds very kewl and that we assume derives its name from this song by cult krautrock band CAN.

Mile End’s latest release is a pedal called MTHRFCKR=RPTR, a hand-crafted delay pedal that replicates those precious random artifacts aging cassette tape machines confer to the sound, adding charming character to (almost) anything that goes through them.

Here’s what you can expect from this repeater’s modulation section:

Random, non-cyclical LFO modulation is what mimics the very inconsistent modulation of physical tape being pushed across magnetic tape heads by a DC motor.

This being said, more “regular” waves (square and sine) are accessible through the Wave toggle. The right footswitch triggers a momentary effect that makes the repeats go into self-oscillation

On top of that, the pedal also includes a preamp circuit that allows for fizzy or tape-saturation-like overdriven tones.

The pedal sold out before the shipping date (February 2021), so you may want to email the dude if you are interested in reserving one from the next batch.

Here are the first videos of the Mile End Effects MTHRFCKR=RPTR. We added it to our list of the Best Tape-Style Delay Pedals.

The MTHRFCKR=RPTR is the fruit of many months of design, from concept to creation based on my obsession in emulating a lo-fidelity tape delay with random, non-cyclical, wobbling modulation and a switchable tape-saturated, blown-out sounding preamp to drive everything.

If you have ever listened to, for example The Caretaker’s ‘An Empty Bliss Beyond This World’, William Basinski’s ‘Disintegration Loops’ or just about any other tape recording that has been played one too many times, you will notice a subtle quality about the recordings that will leave you reeling so to speak in a sense of profound longing for something lost; memories of a more joyous time perhaps. It is something that cant help but make you feel as though suddenly you have caught a rare glimpse into the very intimate lives of complete strangers from the past. As if you have unearthed a box of family photographs or film reels labelled “Summer Vacation 1962” in the back of an estate sale. These are the delights of old magnetic tape mediums and there is something about them that is deeply moving.

This pedal is where I finally landed after years of appreciating and collecting these malfunctioning tape machines, trying to find units with JUST the right amount of wobble, hiss and saturation (usually right before the machine becomes entirely unusable).

The MTHRFCKR=RPTR is aimed at capturing the beautifully haunted artifacts found in poor quality or degraded magnetic tape and dedicated to the unstable mechanical nuances of a malfunctioning capstan motor. It seems odd to set out to recreate the sounds of old, obsolete and often very unusably broken analog machines, but it has become quite clear to me that this sonic quality is at the basis of some of the most inspiring music I have found in the past century, weather intended or not.

Something about hearing ghosts in our machines makes us pause and reflect on the impermanence of our place in this world, the moments of impact that we leave behind as a time capsule to be discovered long after we have left. We try to place a certain sense of our humanity in the things we create and I think this is why the sound of a poorly degraded recordings from the past evoke such a gut wrenching and emotional response. To have a relic, a direct line to the thoughts and creative experiences of those from the past, in those moments of inspiration, in a fleeting period in someones fleeting existence is to attempt to place yourself in the grander scheme of things, on a broader timeline. Just as a thoughtful house fly might consider the age of the oak tree by which they are perched and try to grasp the concept of their lifespan and growth over time, I set out to honour simply a sonic nuance that much like the fly’s relationship to the tree leaves us considering our own impermanence. It is a sound that in and of itself will eventually dwindle as our access to these mediums becomes impossible, forever lost.

I have been heavily inspired by this sound and recreating it while maintaining its reliability has been my obsession here. My hope it to inspire many others who have been moved by the sound of these old malfunctioning tape machines and offer the tools to recreate it without having to stumble upon the small window of opportunity somewhere between functionality and ruination.