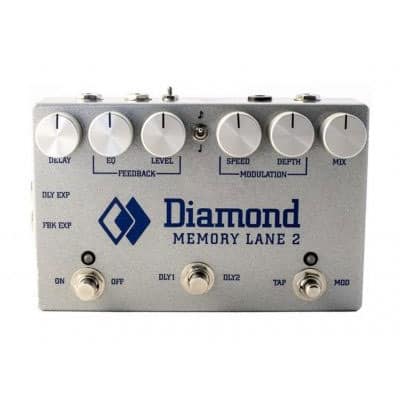 The Diamond Memory Lane 2 is a lush and expressive 100% analog delay pedal capable of producing some very convincing tape-style delays, consistently rich tones, and crazy spaceship noises. Equipped with an easily accessible tap-tempo switch, quarter note delays and triplet/U2 rhythms can be tapped in on the fly. The pedal also features a very dynamic EQ knob that allows for underwater-dark delays, chipper-bright delays, and everything in between. The Memory Lane 2 is also one of few analog pedals that provides a system for presets. Using the middle foot switch, you can toggle between your tapped tempo and the tempo set by the “delay” knob.

While the Memory Lane 2 may not be quite as feature-rich as the Empress Super Delay, it is far easier to navigate in a live setting and carries a few of its own unique tricks. Along with stereo outputs, the ML2 has two inputs for expression pedals to control the delay time and/or delay feedback with your foot. The pedal also has a “slapback” switch, which sets the delay feedback to one repeat only, allowing for those great rockabilly echoes as well as a simulated chorus effect at fast tempos.

When compared with the half analog, half digital delays in the market, the Memory Lane 2 takes the cake for its incredibly vivid and natural analog sound. However, analog-digital hybrids such as the T-Rex Replica, or the Carl Martin Echotone, are capable of much longer delay times than the fully analog Memory Lane, which tops out at 550ms.At a whopping $599, this pedal is certainly an investment. However, the Memory Lane 2’s quality can only be surpassed by the even more costly racks of delays found in a recording studio. – By Daniel Tirer