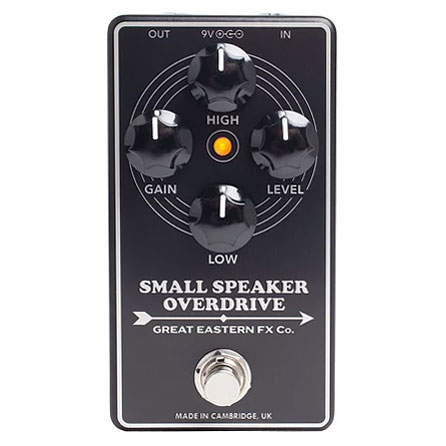 The Small Speaker Overdrive is the first pedal of Cambridge, UK based Great Eastern FX. It’s a stompbox that cleverly offers something that goes against the hype of “fat” overdrives delivering the tone of big amps, the premise being that it’s common knowledge that some of the best-sounding guitar parts ever recorded were played on surprisingly small amps. The Small Speaker Overdrive is an attempt to deliver that sweet small-amp tone in a pedal format.

At low levels, it can act as a boost, preamp or tone sculpting device thanks to its High/Low knobs, while when pushed it can deliver the honky punch of small amps at the edge of breakup and beyond.

Have a listen to the sound of the Great Eastern FX Small Speaker Overdrive in the videos below.

The SSO’s discrete transistor circuit offers outstanding dynamics, with full control of breakup from just your fingers or the guitar’s volume knob.

With gain set low, the SSO can be used as a boost, preamp and tone-shaper, with an uncanny ability to open up the sound of your guitar. Driven hard, it mimics the punchy tone and mid-range ‘honk’ of a simple Class-A amp circuit driving a small speaker.

It’s an open secret that some of the greatest guitar tones of all time were recorded using surprisingly small amps. While “student-model” combos like the famous tweed Champ were never really designed for professional use, recording engineers long ago discovered that these small amps are dynamite in the studio.

In front of a microphone, the low-end roll-off and focused mids you get from a smaller speaker become a distinct advantage. Combined with the dynamic break-up of a simple Class-A amp circuit, this characteristic frequency response makes for killer guitar tones that sit brilliantly in the mix, sounding anything but small.

The SSO is not an ‘amp-in-a-box’ emulation of one particular amp. Instead, this unique circuit captures some of the most desirable characteristics associated with small-speaker, vintage valve combos when miked up in the studio – punchy, upper mid focus, earthy breakup and super sensitive, expressive playing dynamics.

The SSO’s controls are designed to be useful across their entire range, so experimentation is actively encouraged.

Adjusting the GAIN knob takes the pedal from almost clean, through edge-of-breakup tones to saturated overdrive. The SSO is very sensitive to playing dynamics and volume knob adjustments. If you wish, you can use the GAIN control to set the maximum amount of overdrive then explore a range of clean and dirty textures directly from the guitar.

The LOW control lets you add more bass and body to the tone, or rein in that low end for classic, characterful small amp sounds. From a starting point around 9 o’clock, there’s plenty of scope to boost lows if required.