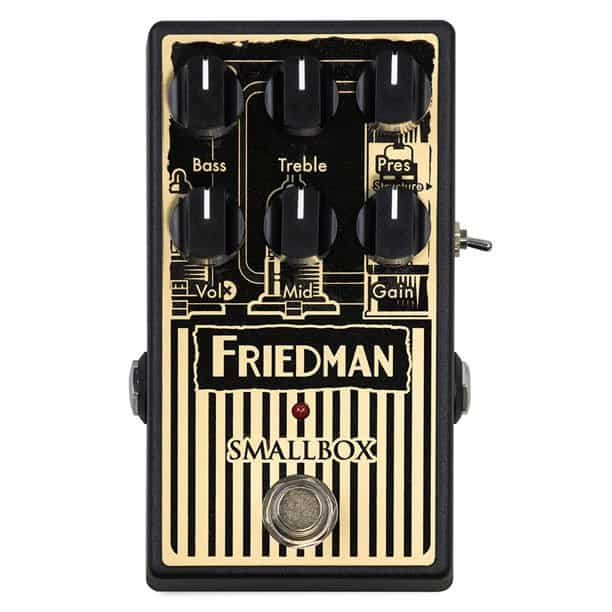 In the last decade or so, Friedman has developed a stellar reputation for its guitar amps first, and then for guitar pedals emulating those very amps – a trend that has become quite common among amp builders.

The Friedman Smallbox overdrive is the stompbox rendition of channel 1 of the company’s Small Box, a well regarded, compact Plexi-style amplifier.

More nuanced and classic sounding than the popular Friedman BE Overdrive, the Smallbox features six controls, just like its big brother amp: Level, Gain and four EQ knobs: Bass, Mid, Treble and Presence. This variety of tonal controls make this pedal very versatile for use with any amp

A toggle switch on the side panel changes the effect’s gain structure, delivering extra push for a more in-your-face, high-gain Plexi tone.

Check out the videos of the Friedman Smallbox, below.

[Wanna get this pedal and be supportive? Buy it through our Sweetwater affiliate program – at no extra cost.]

Dave Friedman’s Small Box all-tube amplifier is well known for being one of the most flexible and touch-responsive amplifiers on the market today.  You can now get the same tonal versatility, sensitivity and harmonically rich overdrive as this legendary amp with Friedman’s new Small Box overdrive pedal.  The Small Box pedal packs the same intuitive control set as the amplifier, allowing you to dial in your perfect shade of rock, from vintage Plexi goodness to high gain madness.  Whether you want a high-output cleaner tone for pushing your amp hard, or a thick gritty drive that will sit well in any classic to modern rock band, a sweep of the gain control easily gets you there. If you want to reign in the gain some more, simply flip the side mounted gain switch and it will simulate the Plexi-Channel of the Small Box amplifier.  To experience the Small Box’s accolade-garnering Friedman tone, put this overdrive pedal on your board today.

British rock at its best

The Small Box overdrive can scream with an unabashedly rock ‘n’ roll voice while still being surprisingly versatile.  You can go from screaming high gain to a killer dirty boost by simply rolling the pedal’s gain knob back and flipping the gain structure switch to “lower gain mode”.

Ready for your rig

The Small Box Overdrive pedal delivers tube like tone in a small pedal format which can be used either into a clean amp or to boost an already over-driven amp.