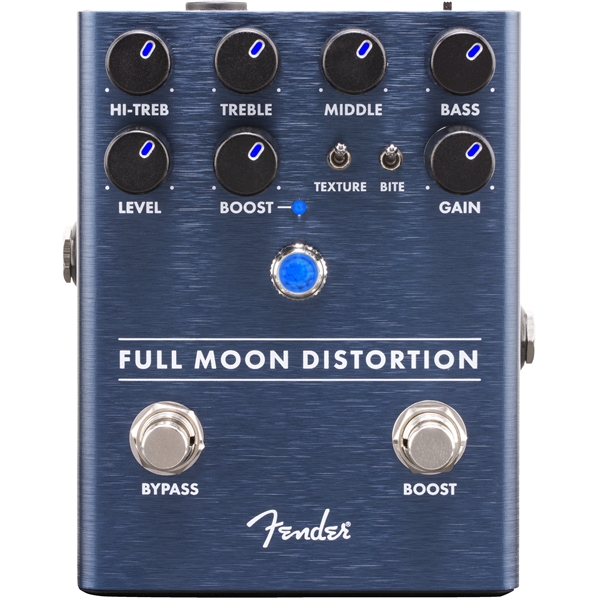 2018 has seen guitar giant Fender aggressively enter the stompbox market with two “waves” of pedal releases, the latest of which included a trifecta of gain pedals, including the Full Moon Distortion, one of their most option-heavy effects.

A high-gain distortion featuring an always useful boost with separate footswitch (delivering up to 12db of gain), this pedal sports a lot of tone shaping goods, including a four way EQ section (with a “Hi Treble” knob on top of your regular Treble one, which is a low pass filter that can tame the sizzling highs) and Bite and Texture toggle switches – the latter delivering symmetrical and asymmetrical clipping for the true tone connoisseurs.

We asked Fender product specialist Chase Paul to tell us more about the pedal’s EQ section, here’s what he had to say:

Stan Cotey designed the circuit with the Hi-Treble control as a way of controlling the “sizzle” and potentially harsh high end that is common in high gain distortion pedals. Technically speaking, the Hi-Treble trim is a low pass filter—with the knob fully clockwise, your guitar’s full frequency spectrum passes through (after the 3-band active EQ section). As you turn the Hi-Treble counter-clockwise, the upper frequencies are restricted and do not pass through; this allows players to dial in the amount of top end to taste.

Conversely, Presence controls (like the one on the Santa Ana Overdrive), allow players to boost upper-midrange frequencies. This is very common on amplifiers as well and lets players add in some nice upper harmonics.

Packed with brutal, high-gain tone and sound-shaping options galore, the Full Moon Distortion pedal has everything you need to unleash sonic mayhem. Both symmetrical and asymmetrical clipping modes are lurking under the Texture switch while the Bite switch shifts the upper-midrange and harmonics to bring out your pick attack, letting you cut and chug through the mix with ease. The 3-Band EQ lets you dial in your sound to taste, while the flexible Hi-Treble control shapes your high end. The second footswitch kicks in up to 12dB of snarling post-gain Boost.