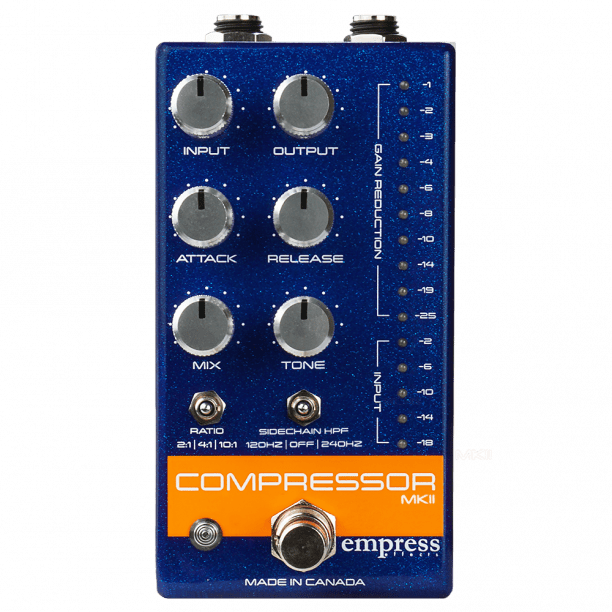 A significant update to their 2010 Compressor, this MkII is the result of a direct interaction of the Canadian company Empress Effects with its users and their requests. It features the same circuit and sound but with a new tone knob, top-mounted jacks, side chain high pass filter built-in (with DIP switches that let you change the frequencies of the filter), separate LEDs for gain reduction and input level, and – of course – compact case!

The Empress Effects Compressor MKII was announced at NAMM 2020 and is now shipping, check out the videos, below.

When we released our original Compressor back in 2011, it quickly became a favourite among guitar and bass players alike who were searching for something more than the typical oversimplified controls found on most compressor pedals. Now, based on our users’ valuable feedback, we’ve taken everything great about our original Compressor and made it even better.

On top of the full range of features and controls normally only seen in high end studio equipment, such as input and gain reduction metering, independent attack and release controls, a mix knob for parallel compression, and an external sidechain insert, we’ve now added a ‘tilt’ tone eq control, and a selectable sidechain high pass filter built into the Compressor’s detection circuit. Oh, and the whole package is now half the size and available in two snazzy colours!