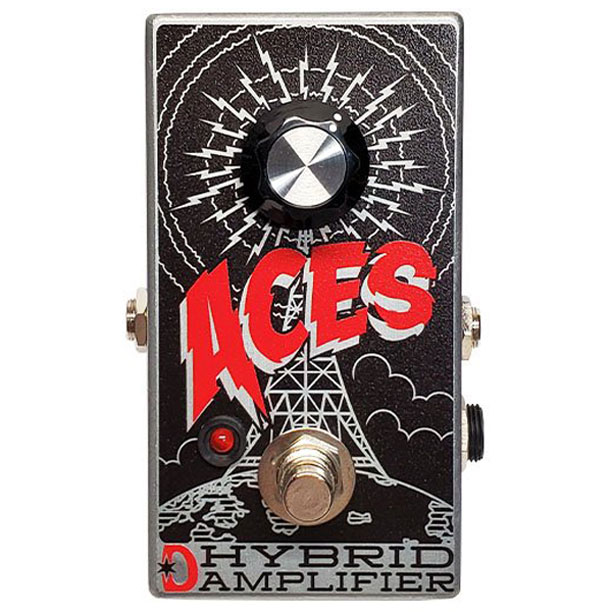 The Daredevil Aces Hybrid Amp is a pedal for those who like simple things: it’s a two-gain stages preamp with just one knob and one on/off footswitch.

Inspired by an RCA data sheet from the ’50s, the Aces’ circuit uses both Germanium and Silicon components to deliver a saturated tone that’s at once dynamic, articulate, and edgy, with the warm sustain of germanium and the biting quality of silicon.

For the tweakers, two internal trim pots set the bias for each gain stage.

The Aces Hybrid Amplifier found its origins in RCA data sheets from the 1950’s. Simple 2 stage gain circuits utilizing germanium transistors, the only kind available at the time. I wanted to use the same approach but give it the Daredevil treatment, creating something unique that nailed a tone bouncing around in my head. The end result cranks out the warm, sweet sustain of germanium, while having that biting rock n roll gain on top… nailing the best of both worlds. Great for solos, a leave-on effect, or stacking with other pedals.

Under the hood is 1 NOS Germanium and 1 modern silicon transistor, each tested and biased to give optimal tonal definition and response.
The two internal trim pots set the bias for each gain stage, you should not need to adjust these for any reason.

The knob controls your output level. Turn it up, stomp, off you go…