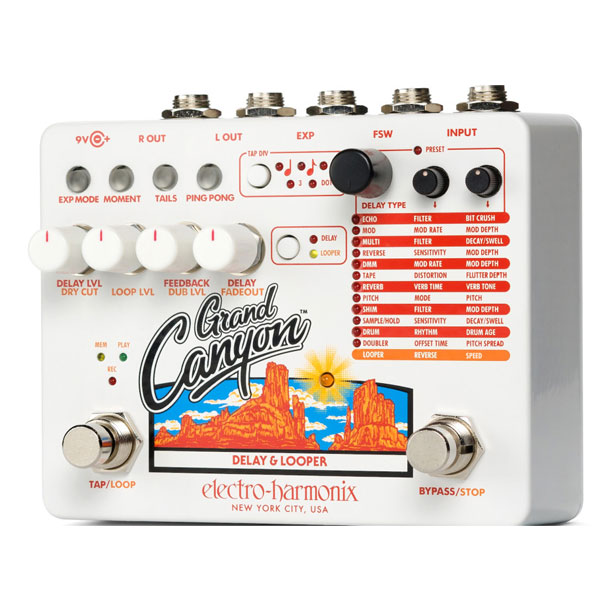 Following a trend we discussed a few months ago in this article, Electro-Harmonix, once known for the simplicity of their delays, seems to be developing some more complex devices on the heels of the success of companies like Strymon.

To spot the trend, all you need to do is count the number of controls on the old Canyon Delay-Looper and the ones on the brand new Grand Canyon, which looks by comparison like a monster-pedal. Mike Matthews has dabbled in synths in the past (the musician behind the effect designer is actually a keyboard player), so it’s not surprising to see his company embracing the “synthification” of guitar pedals.

With its looper capable of recording and overdubbing up to 16 minutes of the pedals’ own output signal, 12 delay modes (including Echorec emulations and sample mode), tap tempo capabilities, and ample room for direct control of the delay’s character, the Grand Canyon aims at challenging other similar lush, multi-mode, studio quality delays like the Strymon Timeline and the BOSS DD-500.

Check out the latest videos of it, below.

The Grand Canyon is EHX’s most advanced multifunction delay and looper pedal. It’s equipped with 12 effect types plus a fully featured looper capable of recording and overdubbing the Grand Canyon’s effects.

7. REVERB – Plate reverb plus echo. A reverberant echo where each repeat is followed by a wash of gorgeous plate reverb. Can also be used as a pure reverb without the delay

10. SAMPLE/HOLD – Sample and hold, senses a note being played and produces echoes indefinitely until another note is detected

12. DOUBLE – Thickens up a mono signal or creates a stereo spread. Includes detune and delay time offset of the left and right outputs