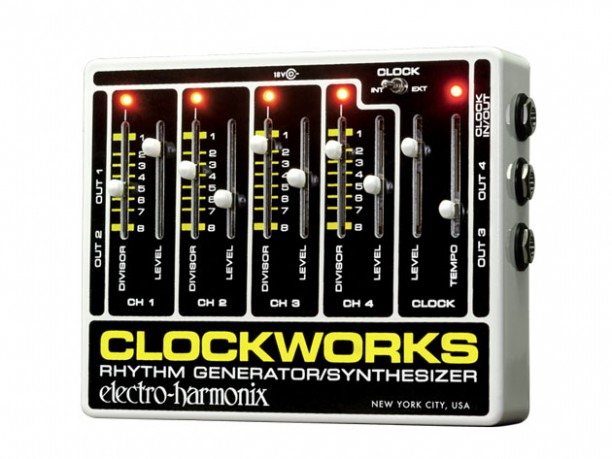 Since most of us around here at Delicious Audio are guitar players, we tend to focus mostly on axe stomp boxes, but this week Electro Harmonix came out with some news that will raise the eyebrows of electronic drum and synth gurus as well as vintage gear aficionados. They have has released a circuit-faithful true analog new take on the classic 70s Clockworks rhythm controller which can be used to control sequencer drums, synths, drum machines, and electronic percussion instruments.

The Clockworks is not a tool for dabbling beat creators, but rather an effect for gear heads who want a single tool to control multiple synthesizers and sequencers in conjunction with one another. It doesn’t internally generate any of its own sounds, but rather the Clockworks serves as the air traffic controller for stuff like drum sequencers and old EHX toys, whereby it can sub-divide the a master beat clock into different time signatures and create cool experimental poly-rhythms.

EHX tends to have a lot of fans of their vintage drum pads from the late 70s and early 80s like the DRM-16, CrashPad, and Space Drum, so having the Clockworks reissue is big news in those circles. The original Clockworks pedal has an online cult following with vintage versions fetching upwards of $700 on auction sites, so the newly issued sub-$300 dollar version will be a welcome reissue. – Ryan Dembinsky