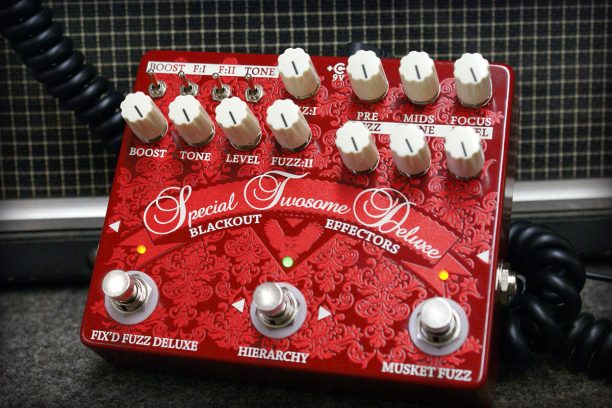 After a slight delay Blackout Effectors is now shipping the Special Twosome Deluxe. If you are unfamiliar with this company you seriously need to get acquainted. Aside from being hilarious in their name choices (‘Cadavernous Reverb’ ranks high in our chart of most ridiculous pedal monikers), they are making some damn fine pedals. Especially the Special Twosome Deluxe – A.K.A. the one “STD” you’ll want to rub in your friend’s face – as we mentioned, hilarious…

This fuzz machine is coming in two versions, one with Musket Fuzz and Fix’d Fuzz, and the other featuring Blunderbuss Fuzz with Fix’d Fuzz. Another new feature in this edition is the hierarchy control being changed from a switcher toggle to a third stompswitch.  The convenience factor is much appreciated.

If sales are anything like they have been with previous editions of this pedal, you would be wise to get on this moving train before it’s gone again. – Grayson Fiske