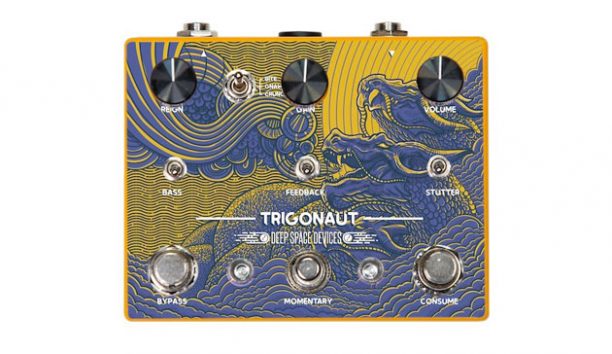 Alabama based Deep Space Devices is one of the most promising new US pedal manufacturers, and we can say that with proof to support the claim, since they won our 2018 contest reserved to the emerging manufacturers participating in the Brooklyn Stompbox Exhibit.

That’s why we couldn’t be more excited to check out their new pedal, called Trigonaut, which looks like something our more out-there and noisy readers will find intriguing: an Octave/Glitch/Stutter/Drive!

Deep Space’s stompboxes always sport beautiful illustrations full of details, and the Trigonaut keeps this trend by depicting on its case two dragon-like figures (or maybe a two headed one!) in dichromatic blue and yellow.

However, compared to the company’s two previous releases (a distortion and an overdrive), this stompbox is something else entirely: it’s a noise device for experimental guitarist that can also deliver “leveled drive to high-gain fuzz,” but that excels at sputtery, glitchy and stuttery noises controlled by two footswitches:

We took this video of the Trigonaut and Deep Space Devices’ Antikythera synth at our Brooklyn Stompbox Exhibit 2019:

Here’s the first video demo of this pedal by Eric Merrow:

Gravitational ripples have been discovered near Earth’s immediate constellations. Through telescopic imaging, we calculated the arrival of what is now known as the Trigonaut. Having only landed on the Earth days ago, this three-headed behemoth has already gathered the attention of doomsday cults, which have built altars of worship begging to be devoured by our alien visitor. Our attempts to name the beast have accommodated the multitudinous array of heads as we have individually named them: Bite, Gnaw, and Crunch.