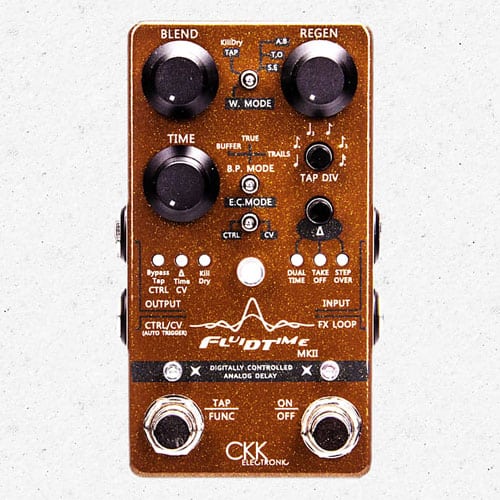 Chinese pedal brands CKK Electronics and Sinvertek (they are the same company) have been gaining more and more respect among the community of pedal lovers for their well designed and affordable stompboxes offering a mind-blowing host of features – so much so that we are tempted to call them the “Chase Bliss Audio of China”!

The Fluid Time mkII is their take on the Bucket Brigade delay with digital controls (in case you are wondering, yes, your signal stays analog all the way).

This pedal as a matter of fact already existed under the Sinvertek umbrella (we blogged about it here), but this CKK version features several updates. It features three creative modes accessible through a toggle switch:

Other functions allow you a series of other functions including Six Tempo Subdivisions and Dry Kill, while the routing/connectivity options are very extensive and include CV In.

Here’s the first video of the CKK Electronic Fluid Time, we added it to our Best Analog Delay and Best Delay Pedals with CV In articles.

The BBD analog delay is always loved by many people, its tone is not only warm and hoarse, but also misty and hazy. This unique taste obsessed so many guitarists, they are repeatedly looking for the tone which is the most closest to the signature 80’s. Because of this, It appeared in many classic riff and solo. The first generation of this delay was released in 2011, after several years of development, we finaly upgraded the tone quality and perfected the functions, we also added the external control to extend the applicable dimensions. The FLUID TIME MK II is the second generation,the birth of it is to better meet the eternal needs of the BBD analog delay.

The tone of the FLUID TIME MK II perfectly preserve the traditional features of Bucket Brigade Device(BBD), it is warm and hoarse, and full of the analog taste. More significantly, the tone is not only very clear, but also absolutely muffled. The FLUID TIME MK II features the unique delay structure, it equipped 5pcs reissued MN3208 BBD chips, the delay time reaches to 700ms. This is a relatively longer delay time, it can gives you more creative possibilities, and it make the FLUID TIME MK II can be more widely used. The FLUID TIME MK II is a pure analog delay which controlled by micro controller. The signal path is all consist of analog circuit, this design ensures the perfect tone quality. In analog circuit part, this pedal equipped a super buffer circuit, it can be used to buffer the original signal. During the performance and rehearsal, even facing of the most complex interference environment , the signal still remains very pure, it will not lose the top end of the sustain, also the air sense.

The control part of FLUID TIME MK II consist of digital signal controllers, compared with the traditional BBD analog delay, this pedal has a great breakthrough in use. Same as the digital delay, the FLUID TIME MK II also features the TAP TAMPO and TAP DIVISION function. When using TAP TAMPO function, you can get a LO-FI BBD delay signal with the delay time of up to 2s. When using TAP DIVISION function, you can divide the current delay time to other beats.

Furthermore, except the common TRUE BYPASS and BUFFER BYPASS, the FLUID TIME MK II was also equipped TRAIL BYPASS. The FLUID TIME MK II is designed a FX LOOP in the effect path, you can add any effects which you need in the loop, such as chorus, wah, flanger, and so on. In addition to the normal mode, the FLUID TIME MK II has 3 special working modes, they are, DUAL TIME mode, TAKE OFF mode and STEP OVER mode. When working in the DUAL TIME mode, you can set up 2 fixed delay times, and during the playing you can freely switching between these 2 delay times . When working in the TAKE OFF mode, you can get a amazing auditory effect caused by the increased feedback. The STEP OVER is a strange effect, like aliens are talking. Both TAKE OFF and STEP OVER can give you a unique tone on the stage.

The FLUID TIME MK II has powerful external control function. By connecting CTRL/CV JACK, you can control and switch the BYPASS, TAP TAMPO and special working modes. You can also connect CV pedal or generator to adjust the delay time, auto trigger the special working modes and adjust the parameters of special working modes. In order to ensure the professional tone and unsurpassed reliability, we chose the military-level PCB and high quality components.The FLUID TIME MK II specifically designed for the professional guitarists and senior equipment specialists and enthusiasts.