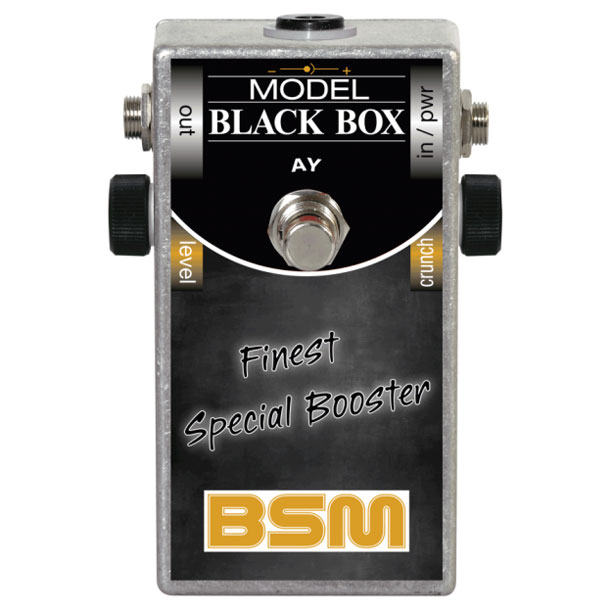 Designed by veteran stompbox engineer Bernd Meiser of BSM pedals, the Black Box is a treble booster variant inspired by the device used by AC/DC’s Angus Young as a wireless system in front of his JTM amps: the Schaffer Vega Diversity System.

The Schaffer Vega wasn’t a transparent box, but it imparted a certain color to the signal that many guitarists from the ’70s grew fond of. The Black Box is an evolution of that circuit that blends it with the functionality of a treble booster: it’s a flexible high-gain treble booster/preamp combination optimized for medium humbucker pickups designed to hit hard the high treble input of a British-style amp. It also works well with P90s and single coils, and can lead to surprising results with any amps.

It has a ton of gain on tap (up to 16 dBs!) and can work at 18v for extra headroom – in which case you shouldn’t place any other pedals after it.

The Crunch control, placed between the pre- and output stage,  interacts with the Level knob, the guitar’s pickup and the amp settings in creating variations in tone, color and saturation that improve your guitar sound, push it to the edge of break up, and/or make it stand out, depending on your needs.

Check out the video of it.

In the mid/late 70s guitarists were excited by the idea of expanding the radius of their stage acting by using a wireless system. There were not many of them around that could be used for guitar. The best device to be found was the Schaffer Vega Diversity System. This unit was technically a very clever solution but also colored the sound to a certain degree. Nevertheless many famous players decided that the freedom of running around and be safe from electric shocks counted more than preserving the pure guitar sound. Amongst them were e.g. David Gilmour, Peter Frampton, Eddie van Halen or Angus Young. When it came to recording some discovered that they got so much used to the coloration (more transparency), slight compression (out of the compounder function) and the additional gain boost so they decided to use it not only live but in the studio as well. The production of the Schaffer device stopped somewhen down the line (around 1981) and the development of modern wireless systems continued. As times went by a guy named Filippo Olivieri (SoloDallas.com) – a great fan of AC/DC and especially Angus Young’s tone on the “Highway to Hell”, “Back in Black” or “For those about to Rock” albums – rebuilt the Schaffer´s device audio circuit, being historically correct as the “Schaffer Replicas”. Now 40 years have gone since the release of the milestone “Back in Black” (2nd best selling album of all times). BSM decided to take the idea of this classic Rock sound and came up with a completely different solution to hit the target. Not interested in making a simple copy of the circuit but developing own ideas to realize the functions with silicon transistors. What you get now is a flexible high gain treblebooster/preamp combination optimized for medium humbucker pickups that works also very well with P90s and singlecoils. It is intended to hit the high treble input of a British Plexi-type amp (or other classic British oriented tube amps) hard. What came out is a real monster, working at 18 volts. But we have to admit that it still works very well with 9 volts, just a little less monstrous. It also comes with a status LED. The preamp stage is a mild treblebooster of low noise followed by a high gain silicon output stage that can easily be symmetrically driven into saturation. Because of the controls for preamp (“crunch”) and output stage (“level”) you can and have to tame the beast! The “crunch” control sits in between the pre- and output stage but you will have to involve the volume control of the following amp as a Mastervolume for generating the overall drivesound that includes overloading the amp’s (possibly clean working) preamp tubes. Unity gain can be achieved by dialing “crunch” to 10 and “level” to 12 o’clock.
Maximum gain is 46dB @ 500hz and output can rise up to 15Vpp … so be careful: “High Voltage!” If you have to use other devices like chorus or delay pedals in the chain behind the Black Box and in front of the amp it would be better to run the unit at 9volts to save the other pedals lives.
The BSM Black Box is inserted between guitar and amplifier, not into the FX loop. The magical tone is achieved by the interaction between guitar pickup, booster and amplifier. By using the external DC jack, you can power the unit with 9 volts up to 18 volts for increased headroom and output. An internal 9v battery with a current consumption of approximately 3mA@9V (5mA@18V) can also be used to power the unit.