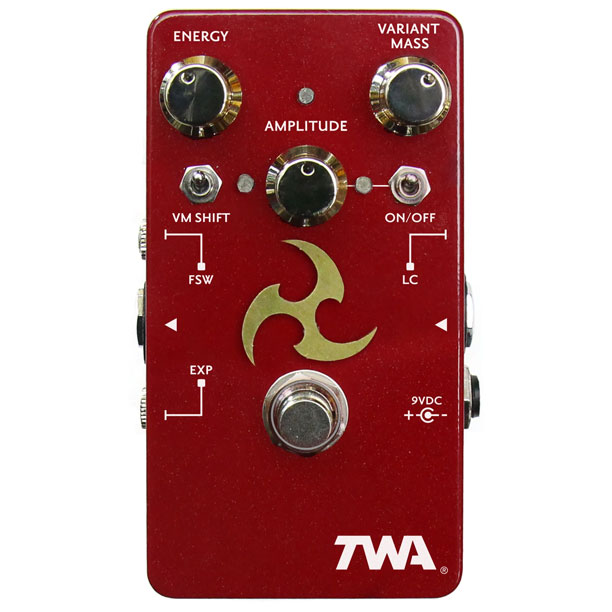 Acting as a cocked wah pedal with an adjustable peak and a ton of gain, the Triskelion can do many things to your tone, by pushing different frequencies, just like a parametric mic EQ with adjustable Q would.

Controls do the following:

To our knowledge, we were the first company to offer a production re-production of the marvelous & mysterious Systech Harmonic Energizer® used by the likes of Frank Zappa, Greg Lake, Joe Walsh and other 70’s icons.

Debuted at Winter NAMM in 2010, the Triskelion® elicited hushed whispers, envious glances, and more than a little head-scratching. It was also greeted by an e-mail from Dweezil Zappa, who ordered three of them for his touring rig.

Essentially a parametric midrange filter with adjustable peak and an obscene amount of gain, the Triskelion® reproduced all the searing, scorching, squawking sounds of the original Systech with pinpoint accuracy. It also has the added benefit of an extended high-frequency range & expression control over the filter sweep.

Never satisfied with – well, anything, really – we decided to shrink the “TRISK” down to a more pedalboard-friendly package while also adding some new features based on user suggestions.

During this overhaul, our engineer also took it upon himself to re-design the filter section of the circuit, reducing the noise level and allowing it to play much better with other dirt devices.

We released the Triskelion® Mk. II in 2015, and it’s developed a bit of a cult following with pedal peeps thanks to the hi-fi nature of its gnarly noise and a highly functional feature set.

However, admittedly there were some things that were lost in the transition between the Mk. I & Mk. II versions. So, after obsessing about these minor issues over the past five years, we finally threw down the glove and challenged our engineer to take the best aspects of both iterations and shrink the whole thing down into an even smaller footprint.

Now housed in a Hammond 1590B chassis, the Trisk-3 takes up even less real estate than its predecessors, yet it still packs all the processing power that those two crimson critters were famous for.

Back is the Variant Mass Boost switch of the original Triskelion®, which adds an ear-shattering upper range to its already peaky filter. Also back are the 30-odd Hertz of low frequencies that had mysteriously and inexplicably vanished during the creation of the Mk. II.

What’s not back is the higher noise level of the Mk. I – instead, the pro-audio quality noise floor of the Mk. II is in full effect, allowing the new version to function with surgical precision in a variety of high-gain settings without sounding like the Cosmic Microwave Background.

Speaking of Gain, the Triskelion’s can now be switched on/off via either a top-mounted mini-switch, or via an external footswitch connected to the side-mounted mini-phone jack.

A second mini-phone jack allows for connection of an Expression pedal to control the frequency sweep of the filter for wah-wah wiggles, dialing in feedback, etc. You can also connect the TWA Side Step® to this jack to turn the Triskelion into a tap-tempo LFO modulator of doom.