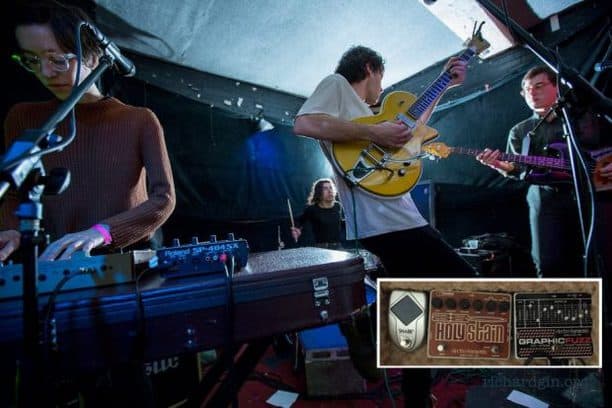 Bellows is the bedroom project of Brooklyn songwriter/guitarist/producer Oliver Kalb, an ex member of now defunct NYC artist collective The Epoch. Active with this solo project since the beginning of the decade, Oliver has developed a sound that’s at once melodic, edgy and delicately textured. Latest and third LP ‘Fist & Palm‘ showcases a preference for intimate atmospheres (at times reminiscent of Elliot Smith’s whispered pop) and an effort to explore new sonic territories. We asked Oliver to share with us a few words about his favorite gear.

“Before I talk about the gear I use, I should explain that Bellows as a live rock band and Bellows as a songwriting and recording project are sort of distinct and different sounding endeavors. They also use different gear set-ups. I make my albums mostly alone, using MIDI and experimenting with guitar noise and synth or vocal textures to make my folk songs kind of live and breathe in their recordings. The songs are written alone and recorded mostly alone, until the very last stage of recording an album.

In the case of my latest album Fist & Palm, right at the end of recording, I brought in my friend Felix Walworth to record live drums, Gabrielle Smith to write violin and vocal harmony sections, and James Wilcox to sequence electronic drums on some tracks. Other than that, Fist & Palm was made alone in my bedroom, using layers of sounds and recording with GarageBand (this DAW is unfairly maligned). After I make a Bellows album, I teach the songs to my band and we kind of interpret the recordings so that they can be presented in a rock-band context (guitar, bass, synth & sampler and drums) and not lose their intimacy. Part of interpreting my recordings into rock band arrangements means sacrificing some of the complexity of the album in favor a more energetic or immediate live arrangement. So I talked about the gear we use live and about how each of the elements of Bellows’ live set plays a role in approximating more complicated sounds from our albums. To make the distinctions clearer, I linked to a video of our Audiotree session, where we play many songs from Fist & Palm live, that can be compared and contrasted with the recorded Fist & Palm album that’s up on Bandcamp and elsewhere.

This is my golden guitar. I love this guitar a lot. I found it in a store in Philadelphia called DiPinto Guitars. This guy Chris DiPinto just makes these guitars in his store, and he gave me a really big discount when he found out that I was a touring musician. I can’t recommend these guitars enough – they have a really warm, full sound, and are really well suited to the way I play guitar — changing quickly between quiet, lush, finger-picked sections and big bombastic distorted sections. I think this might be an effect of how the humbucker pickups and the heavy wood work together to create a nice resonant sound but I don’t really know enough about guitars to know for sure.

This is the best fuzz / distortion pedal I know of. It’s cool because it has an envelope filter that affects the “dynamics” of the pedal, meaning you can set the pedal to respond to how hard or softly you’re playing. I use distortion as a dynamic tool – it usually comes into a song right at a climactic moment, and never stays in the song for very long. The Electro-Harmonix Graphic Fuzz also has an equalizer built into it so you can make your distorted tone contain more bass or treble frequency, depending on how you like your guitar to sound. I tend toward a really big, bass-heavy distorted tone, almost like a Black Sabbath type of thing because I use distorted guitar so rarely, and when the distortion kicks in I want it to feel very different from the clean tone. I get this tone by drawing a pattern on the Equalizer section of the pedal with a lot of bass and low-mid frequencies and by taking out a little of the treble so that the fuzz isn’t so grating (see picture). I equate treble-heavy distortion with The Smashing Pumpkins’ tone, which strikes me as more of a classic rock band distortion-throughout-the-whole-song use of the fuzzy sound. I prefer distortion as boost. I try to treat it like a different instrument that comes into a song only when it is needed, and used as rarely as possible. The best example of the way distortion is used in Bellows is in our song “Funny Things” (streaming below), which cycles between big distorted rock guitar and more delicate finger picking guitar. It’s also a good example of what the Graphic Fuzz sounds like.

I used to have an Electro-Harmonix Holy Grail reverb pedal that I really loved. It was stolen, along with all of the rest of Bellows’ gear, on a tour we went on a few years ago. I sort of scrambled to put together a new pedal board so that I could continue the tour. At the guitar store I went to, the closest thing to my old Holy Grail pedal they had was a used Electro-Harmonix Holy Stain pedal. I found that there’s a Hall Reverb setting on the Holy Stain that sounds basically the same as a Holy Grail reverb so I’ve just been using an approximate version of my old guy ever since. I don’t recommend this pedal very highly because it has a lot of really bad fuzz & distortion settings in it that can be accidentally turned on at inopportune moments. It also somehow makes your guitar sound quieter when you run it through the pedal board for reverb. Dunno why. I like a little bit of reverb to be on my guitar at all times to kind of soften the tone and make it more dreamy and lush, but I don’t like to use so much reverb that the song sounds washed out or shoegazy. The reverb is mostly just to give the impression of the guitar being played in a wide open space and softening the kind of jingle-jangle rhythmic sound of strummed electric guitar. Sometimes in recordings I layer two hard-panned acoustic guitars to either side of the mix, and then put an electric guitar track with reverb right in the middle of the mix. It has the effect of adding weight to the acoustic guitars and making the three interplay in a way that sounds like one guitar with an interesting kind of heft. I’m really proud of the way the guitars are mixed in my song “Bummer Swells” — you can hear it below.

This is an autotune pedal that I’ve been running my vocals through for the last year or so since we’ve been playing songs from Fist & Palm live. I use a lot of vocal distortion and manipulation in my new album, especially autotune, and I wanted to find a vocal effect we could use live that might approximate some of the vocal sounds on the album. My friend Emily Reo (who makes really beautiful vocoder-based music) recommended the this vocal pedal. TC Helicon makes fairly straightforward, easy-to-use vocal effects pedals that you plug your microphone into just like you would plug a guitar into a pedalboard. I’m still a beginner with live vocal manipulation equipment. In Fist & Palm, there are several moments that are very self-consciously “pop”, in which I kick into autotune to serve a deliberate dynamic purpose, sort of like the way I use distortion as a dynamic tool in some other songs. The best example of this is in “Spring, Summer, Autumn, Winter” where the autotune hits in the choruses, differentiating the chorus sections thematically from the more natural, human-sounding verses. The chorus of the song is about feeling mystified by the passage of time. It’s about losing touch with my identity and my values as a person as time passes and I spend more and more of my life on tour or traveling playing music. That feeling of isolation & mystification at the passage of time is self-consciously referenced in the song’s move into autotune in the chorus. The autotune makes the song feel more mechanical, almost as if the song is reaching for pop-song self-assuredness, but ironically it ends up making the song feel even more lonely and isolated, as if it solidifies the impossibility of certainty and comfort for the narrator of the song. Auto-tune is a sound infused with so much cultural baggage, especially in the world of rock, that I think it can play an interesting role in challenging how a person hears and folk or indie rock song. I feel like when the language of pop music is employed in the midst an otherwise folk or indie-rock sonic palette, a different kind of listening is asked of the audience. I like to play with the tension between pop signifiers and folk signifiers in my music. 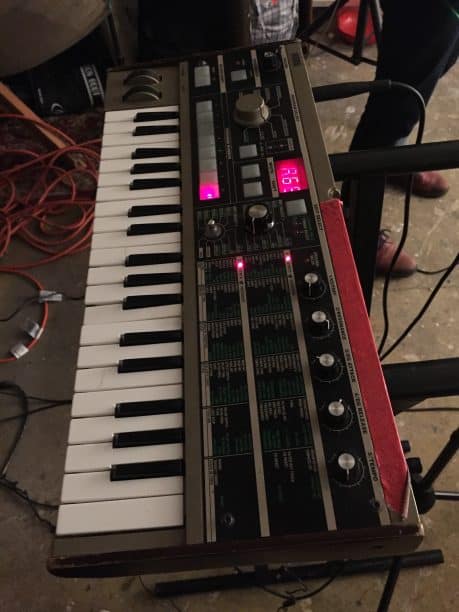 This is a handy synth because it has a useful array of presets that can approximate a lot of different textures that I’ve made on my recordings, most of which were not made using the MicroKorg. I don’t record with this synth very often because most of its sounds are very bombastic. The MicroKorg is very well suited to big horn blasts and dance breaks, but can’t deal very well with subtler or quieter moments. For instance, it has almost no straightforward piano or Rhodes type sounds, and doesn’t have many options for playing the synth in a piano-like way with two-handed parts (it only has three octaves). But it’s very good for monophonic, synthesized sections. Gabby Smith, who plays synth in Bellows live, made a really great patch for the half-time climax in our song “Beauty”, where in the album version of the song a big layered section of horns plays the song’s central melody. Gabby’s interpretation of this horn-section is a nasty distorted monophonic bass patch, but it works really well as an approximation of a lot of horns playing a kind of fan-fare section in the climax of the song. The live version of “Beauty” is a good showcase of a lot of different MicroKorg sounds we use in Bellows.”