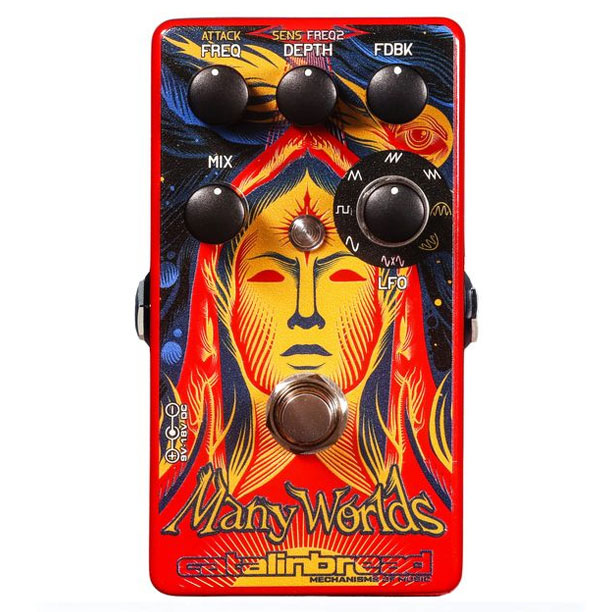 The Catalinbread Many Worlds is an 8-Stage Phaser born out of an experiment related to quantum physics and an orange MXR pedal.

You can read about this mystical story here, but the bottom line here is that this circuit features the modulation of one LFO by another LFO, featuring eight selectable phase control parameters, including five LFO waves, two envelope-dependent phase shift modes, and one “special” mode called Battle – that’s where the double LFO action happens.

This means that while the Many Worlds can deliver your classic and swirly phaser tones following the usual sine or triangle wave, you have four more unusual LFOs to choose from (reverse and forward sawtooth. square, and the aforementioned Battle), plus two “auto-phase” modes that react dynamically to your performance (Envelop Up and Down).

When one of the envelop modes is on, the Frequency and Depth knob become Attack and Sensitivity which set the way the phaser reacts to your dynamics.

But let’s let the circuit speak for itself, here are the videos of the Catalinbread Many Worlds 8-Stage Phaser! We added it to our article about the best phaser pedals.

The Many Worlds is an eight-stage phaser with eight selectable phase control parameters, six LFOs and two envelope-dependent phase shift modes. Yes, you can get classic, swirly and rich, vibe-esque phaser sounds from the Many Worlds. The fun doesn’t stop there, however; we take you on a multi-versed quest of Many Worlds to uncover some unique otherworldly sounds as well.

The Many Worlds features a robust LFO engine with classics like sine and square sharing the same control with reverse sawtooth and two independently controlled and intermodulating sine waves. Lastly, we’ve added envelope-dependent phase shift–both up and down–letting you control the phase shift with your pick attack, rather than driving it with an LFO. This gives you an autowah-esque manually controlled phase shifting experience.

The idea for Many Worlds began when we were experimenting with different LFO shapes for a phaser project–initially starting with the core of the classic “orange box” phaser but with a number of extra features.

This LFO framework eventually led to experiments involving the modulation of one LFO by another. This is where the name Many Worlds comes from—the “Many Worlds” interpretation of quantum mechanics is a theory by Hugh Everette which states that quantum wave function collapse is actually the superposition of quantum states built by the decoherence of independent wave functions. This leads to the theory of parallel universes where quantum measurements have opposite results.