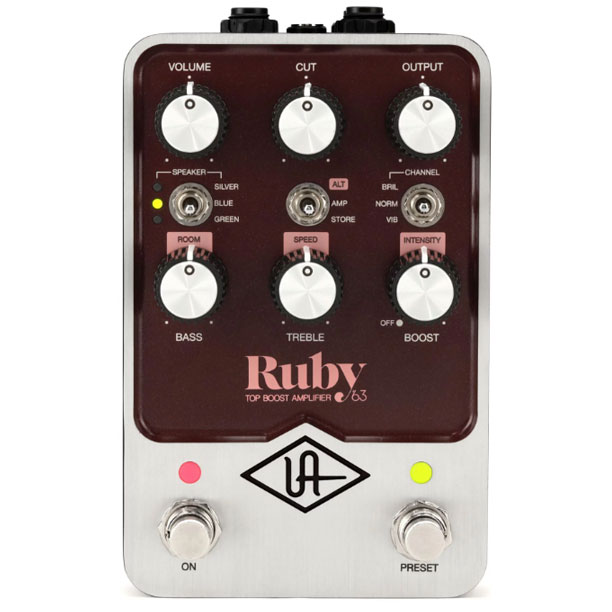 Part of a three amp-in-a-box pedal addition to the Universal Audio pedal line, the UAFX Ruby ’63 Top Boost Amplifier is an authentic emulation of a Vox AC30, with 3 x Amp modes, 3 x Cabinet emulations and 2 x Boost modes that capture the sparkling cleans and rich overdrive of the popular British amp.

Like the previous three pedals in the series, this is a multi-mode, studio-grade, stereo stompbox with presets and deep functionality and connectivity. All pedals in this series feature cab simulations, so they are ideal to record direct, but they can be bypassed if the pedal is used on a board with a real cab after it.

Built on a dual-engine DSP, this pedal includes also a Room effect (basically a short reflection reverb) and a vibrato, that can be controlled through three Alt knob settings.

It comes with three channels:

These are the three 2×12″ Cabinet models that come with the pedal:

…but they can be replaced with these other free additional modes, which can be added via the free UAFX Control app, which can be connected not only via USB but also Bluetooth (!!!):

The Boost knob adds extra gain and color to your signal, using emulations of the’60s Dallas Rangemaster germanium treble booster or the preamp of a ’70s Maestro EP-3 tape delay.

Being Universal Audio a leader in pro audio plugins, it harnessed its expertise in mic, cab, and room modeling technology to include features that allow fine tone-tuning unforeseen in other pedals of this kind, and that can be tweaked through the free app.

The routing also includes some special features… here’s the picture of the back panel: 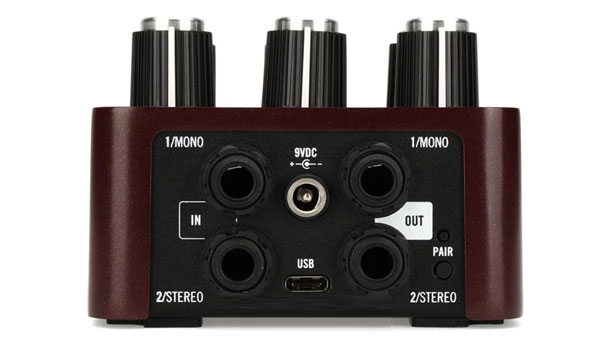 First of all, the pedal has stereo ins and outs, which is great, and Bluetooth connectivity, which is pretty much unheard of.

Also, like the other pedals in the UAFX series, it allows you to bypass your amplifier’s preamp when the pedal is engaged via the special “4-cable” mode, adding two additional channels.

You can find a more complete list of the features in this interactive manual.

Needless to say, features wouldn’t mean much if the pedal didn’t sound great. You can judge that for yourself in the videos below.

The UAFX Ruby ’63 Top Boost Amplifier pedal gives you the quintessential British valve amp beloved by artists and producers for over 60 years, from Queen to U2 to Radiohead.

Experience British Tube Amp Tones, Stage and Studio
Whether it’s replacing your amp rig and going direct to front-of-house on stage, or recording tracks into your DAW — Ruby ’63 gives you the inspiring, album?ready tones of an expertly miked “golden unit” vintage tube combo, within seconds.

Customize your Sound with the UAFX App
Ruby ’63 really gets cracking with the UAFX Control mobile app. Download custom artist tones, recall and archive your presets, and dive deeper into the amp that ignited the British Invasion.