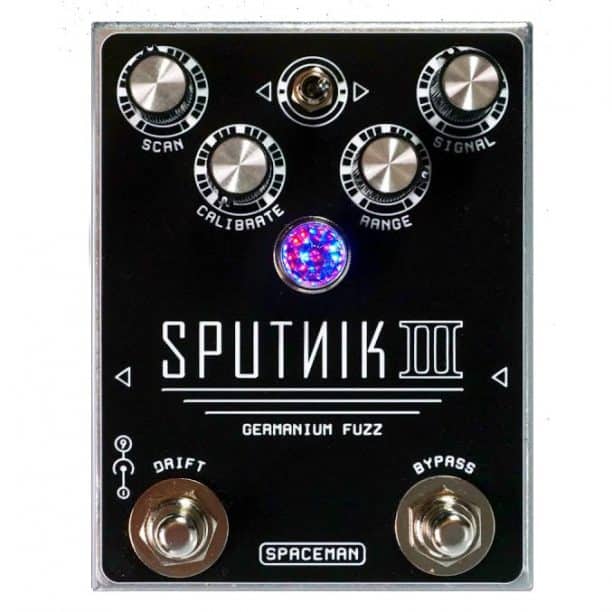 Originally built in small batches, the Spaceman FX Sputnik is an all-germanium fuzz featuring vintage Soviet transistors which became instantly hard to find. Today the Portland builder announced version III, which incorporates all the functions from the previous iterations, plus some new features, and will be released both in a limited, hand-made version and a more affordable mass-produced one.

Within the Sputnik you’ll find a plethora of tones, including smooth, gritty, vintage, modern, thick, thin, buzzy, bassy, splatty, sputtery, noisy, buttery, controlled and very much out-of-control. For the latter kind of sounds, the Drift footswitch unleashes squealing and noisy tones and its response can be tweaked through the Scan knob. V III allows you to control this mode both in latching and momentary ways through the new footswitch.

The toggle switch offers mid-scooped and flat settings in conjunction with the wide-range Calibrate tone control. The Signal knob controls the Output while the Range one the fuzz gain.

Here are the latest videos of the Spaceman FX Sputniuk III Germanium Fuzz.

Germanium fuzz has a long history in the world of musical effects. The nature of germanium, its variability and temperament, make it an interesting parallel to the musical mindset of the creators who utilize it. Sometimes smooth and warm, sometimes harsh and unpredictable, always sensitive and nuanced, germanium is an element of reflection. A mirror into its users. This range and scope is on full display with the newest version of our flagship fuzz pedal, the Sputnik III.

Complex textures, gritty crunch, beautiful sustain and character. It’s all there waiting for you to discover. As with all Spaceman pedals, the Sputnik fuzz series is an homage to the golden era of electronics and is brimming with vintage soul. Utilizing a NOS Soviet germanium diode and transistors, we’ve gone to great lengths to ensure the Sputnik III lives up to the reputation of its predecessors.

Characteristic of germanium fuzzes, all of the controls are quite interactive and a wide variety of sounds can be observed with experimentation. The Sputnik III incorporates the best features of both previous pedals. The transformer based pickup simulation of the Sputnik II ensures that the Sputnik III will behave anywhere in your signal chain. The footswitch actuated DRIFT mode has also been taken from the Sputnik II and enhanced with optional momentary functionality. DRIFT mode and SCAN control allow you to unleash the fury and unpredictability of the Sputnik III. With careful use of playing dynamics and control settings, DRIFT mode can yield a nearly infinite range of truly unique sounds. The tone control is a mix of both its predecessors. The toggle switch offers mid-scooped and flat settings in conjunction with the wide-range CALIBRATE tone control. Relay based soft-touch switching provides more durability and flexibility than ever before. Housed in a durable cast aluminum enclosure, the mid-sized form factor allows for an enhancement in function over the original Sputnik, and an enhancement in practicality over the Sputnik II. Step into your inner world and discover a new wellspring of creativity and boundless possibility with the Sputnik III.

TRULY HAND CRAFTED
Hand-wired and built in Portland, Oregon, the Sputnik III features true-bypass relay switching with soft-touch footswitches. On top of the cast-aluminum enclosure sits a durable, engraved vinyl faceplate and jewel indicator light. This pedal is built to last a lifetime, both on Earth or in the vacuum of space.