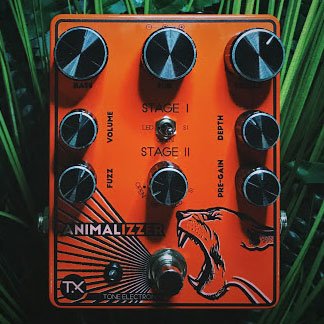 Tone Electronix (aka T.X Pedals) is a one man pedal builder from Portugal.

The company’s signature pedal is the Animalizzer, a fuzz beast that can recreate all sorts of fuzz sounds thanks to two clipping stages (first LED + Silicon, then Germanium + LED + Silicon) preceded by a boost and a three-way EQ section for tone sculpting. The mids knob is particularly effective in creating scooped or midrangey tones that cut through the mix.

More info about the Tone Electronix Animalizzer controls can be found at the bottom of the post, here are the demos of it.

This is the pedal that started all this madness.

The Animalizzer was conceived, born, raised and nourished in a beautiful beach town called Figueira da Foz in Portugal. It has seen the first light of day in 2017.
It is a unique pedal, handmade, one by one.

The Animalizzer (“the MufferFuzzer” as originaly was called) is a distortion…wait…is a fuzz…no…. it’s BOTH.
?Yes, it’s a distortion/fuzz effect pedal for guitar and bass – still, it can even sound like mild overdriven tones in some settings!
Well, it’s a beast on it’s own (if we may say so).

In a similar way of the well known Big Muff circuit – hence the “MufferFuzzer” – it comprises 2 clipping stages, STAGE I and STAGE II, right after a BOOST stage and before the EQ stage. But that’s about as far as these similarities go.

All these stages are controllable by turning knobs and toggling switches.
It seems complicated but it’s really simple.

One more technical fact is that it’s current draw is less than 5 mA.