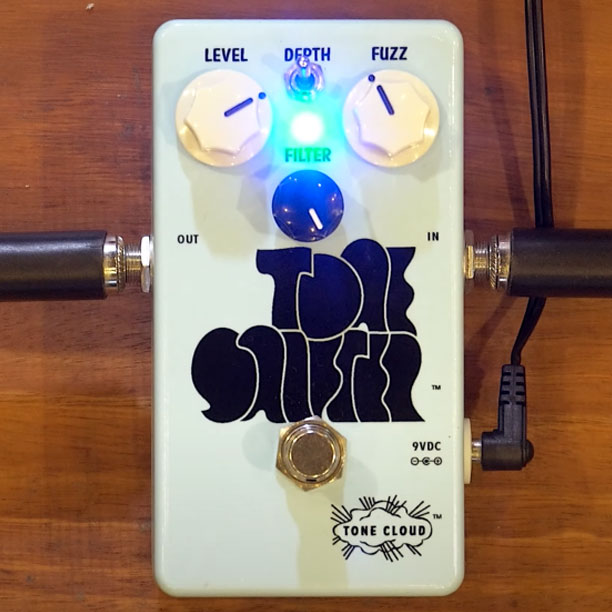 Hand-wired in Melbourne, Australia, the Tone Cloud Tone Snifter is inspired by the VOX Tone Bender fuzz, the Italian version of the circuit with a distinctly different sound from the more popular British version. But it’s a lot more than that.

The vintage unit’s two germanium transistors were replaced by more stable silicon ones with a filter knob & depth switch, the Tone Snifter adds a couple of extra control for added fun:

Filter knob: This control acts as a high-pass filter with a beefy bass response at 100%. Rolling it back will filter out the bass for a more vintage vibe.

The Tone Snifter is based on the classic fuzz circuit, the VOX Tone Bender. A precursor to the Fuzz Face; these Italian Stallions were typically a two transistor, germanium type fuzz with a distinctly different sound to the other Tone Benders made in the UK.

What makes the Snifter unique in its design, driven by two silicon transistors with a filter knob & depth switch, which adds an extra grunty gain stage with more sustain and fuzz grain. As well as the edition of an LED indicator and pop filter, there is an integrated power supply with hiss filtering.

Utilising through-hole, higher quality components & wired point to point. Silicon transistors ensure tonal stability in all atmospheric temperature, unlike its germanium counterparts – the Tone Snifter requires no further biasing and is ready for the road.

DEPTH SWITCH: The 3 position DEPTH switch toggles through the basic two transistor fuzz circuit, the modded addition addition of the stacked, extra gain stage, and a vintage setting with serious presence. The output is significantly louder in this setting.

FILTER KNOB: The FILTER knob acts like a high-pass filter with a beefy bass response at the fully dialled setting. Roll it back to filter out the bass for a more vintage profile.

The Tone Snifer is wired in true-bypass and powered either by wall wart power supply or 9v battery (unplug your instrument cable to preserve battery life. Although the Snifter can produce some pretty cool sounds with a depleted battery, a fresh 9v will produce the optimal signal-to-noise ratio with full fuzz & sustain. Handwired locally here in Melbourne, Australia.