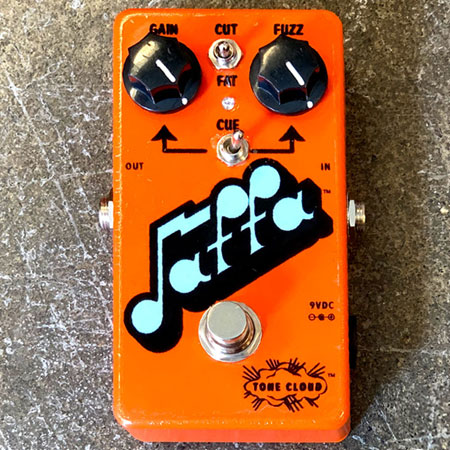 Tone Cloud Effects is an up-and-coming builder from Australia exclusively dedicated to fuzz pedals, and the Jaffa Fuzz is the company’s take on the Fuzz Face circuit.

This touch-responsive pedal utilizes four silicon transistors to ensure tonal stability and adds one gain stage to the traditional fuzz face circuit for extra flexibility. The pedal consists of two separate circuits whose stacking can be modified through the Cue toggle.

While the two knobs are rather self-explanatory (Gain and Fuzz), the fun here is triggered by the toggle switches.  The Cut/Fat one on the top removes the low end on the Cut position for a more mid-focused tone almost reminiscent of the cocked wah trick, or boosts the bass frequencies in Fat mode for a warmer tone which produces extra overtones at higher gain settings.

The Cue toggle switch reconfigures the circuit so that the two knobs act as a pre-amp gain (Fuzz) and master volume (Gain).

Check out the sounds of the Tone Cloud Jaffa Fuzz in the videos below.

Think of the Jaffa being a fuzz and a dirt pedal stacked, which you can change their order with the flick of a switch. The topology bears resemblance to the original Fuzz Face, only with an extra gain stage; utilising 4 x silicon transistors to ensure tonal stability in all atmospheric temperatures.

Featuring unique extras such as the CUE Switch – a toggle-switch that designates the output to dial to control overall effect volume allowing each knob to act like a pre-amp gain pot on a master volume amplifier.

The CUT / FAT switch acts as a high-pass filter giving the Jaffa a cocked wah quality taking out flubby lows often found in Fuzz Face circuits. When switched over to the FAT you will hear a full bodied warm, full bass response for with added overtones in higher gain settings.

The Jaffa is very responsive to your guitar pickups load and will clean up nice and glassy with your volume control backed off. The Jaffa is wired with true bypass switching using Allpha switches and Alpha 16mm potentiometers. This unit can be powered by either a 9v battery or wall wart power supply. The Jaffa will sound best placed closest to the start of your signal chain before buffered pedals. Handwired in Melbourne, Australia.