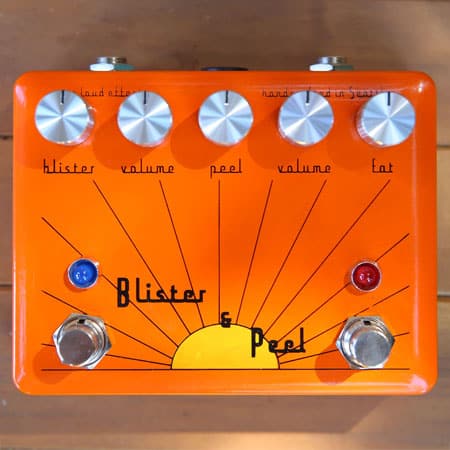 Based in Seattle, Spun Loud Effects is a small builder with only two pedal designs in their roster, one of which is a limited edition flanger. Their main offering is the dual fuzz and distortion Blister and Peel Fuzz, which was recently released in its 2nd version.

The pedal can cover most of your gain and dirt needs, from acting as a simple boost to mangling your tone beyond belief through radical amounts of fuzz and saturation. The two effects feature separate footswitch and can therefore be played separately or stacked on top of each other

The Blister side (left) is a simple distortion based on the classic Electra distortion design. Turning the gain all the way up will produce results similar to an octave fuzz. The Peel side (right) is a fuzz inspired by the Christian H. Bazz Fuss design and includes a tone control that cuts or boosts the high end.

Here’s the video of the Spun Loud Blister and Peel.

The Blister & Peel V.2 takes the original gritty and ultra flexible design and updates it in several ways. For starters, we’ve gone from a strip board build to PCB, which both makes the builds faster and cleans up the inside considerably. What goes on that board is updated with added capacitors that improve both the Blister and Peel gain sweeps, and reduce noise across both sides. We’ve also moved it to the beautiful Gorva Design S90 enclosure, and moved the input and output jacks to the top for easy board setup. Because of the ease of construction, we were able to drop the price as well, which is a big win in our book.

Here’s the rest of the details: This is a two-in-one dirt pedal that covers everything from a light boost to extreme fuzz. The Blister side is based on the classic Electra distortion and will provide a significant volume boost even without turning up the gain. Crank the gain all the way and it slips from distortion into octave fuzz. The Peel side is a fuzz effect that has its roots in the Christian H. Bazz Fuss design and also includes a tone control that will cut or boost treble sounds in the mix. You can run them separately or together for more shaping of the Blister side or boosting of the Peel side. This true bypass pedal works great for guitar or bass and runs on a standard 9V negative tip Boss style power supply (not included). In addition to high-quality PCBs and Gorva enclosures, our pedals use ultra-high-quality Gorva footswitches, Switchcraft or Neutrik jacks, and premium components. Each pedal is assembled by hand and tested extensively before shipping.