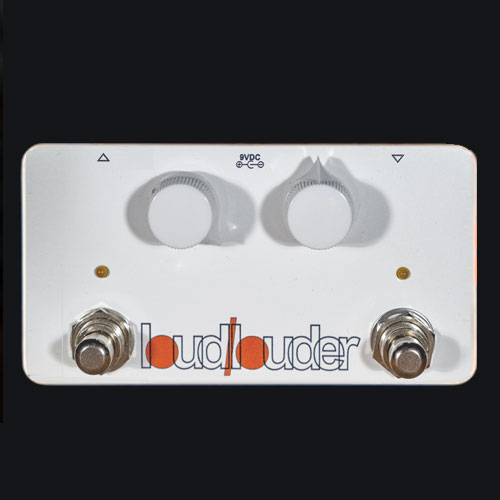 The Chadderbox Effects Loud/Louder is a simple two-knob, two-footswitch pedals that provides two boosts in one pedal, with the right channel delivering more gain and a thicker sound.

Based on a dual Mosfet circuit, this is a pedal that slightly colors your tone and can provide a wide range of gain options, since the two channels can be run stacked on top of each other (left into right) or separately, in which case activating one channel deactivates the other one.

The first configuration (stacked) produces enormous amounts of gain, generating some distortion internally or pushing your amp into break up (or both). The second one, called by the builder “flashback,” allows you to set two different boost levels with less extreme potential in terms of distortion and output level, but incredibly useful for dynamics in a live context.

Here are the videos of it!

DUAL MOSFET BOOSTER (NOW WITH LOUDEST MODE!)
it has arrived. an old favorite that has been updated with modern functionality. its all very simple. the left footswitch turns the loud channel on & off and is controlled by the left knob. the footswitch on the right turns the louder channel on & off and is controlled by the knob on the right. turning the knobs CW adds more gain and turning the knobs CCW removes gain. while both channels are similar, the louder channel has more gain available and also provides a thicker sound. in addition, there is a Flashback Switching feature that allows you to momentarily change states for as long as you hold down a footswitch. to revert the pedal to its previous state, just release the footswitch. neat, huh? this enables you to do quick, momentary changes on the fly, eliminating the need for an extra footswitch press.