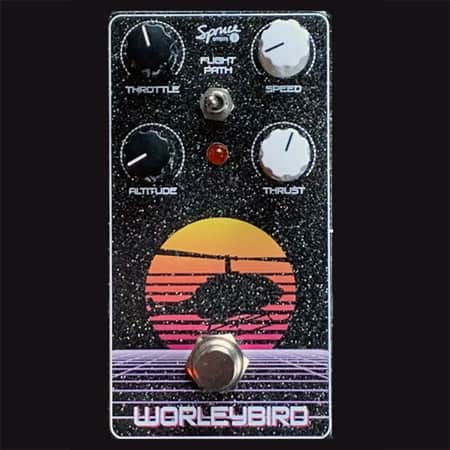 The Worleybird is a copter-like trem collaboration between Spruce Effects and The Clifton Worley Show podcast. Lots of delicious gain on tap and a really nice sounding trem that can be placed before the gain circuit for a traditional tremolo sound or after for maximum chop!

This is what the controls do:

Check out the profile we did on Spruce Effect back in 2018 here.

The Worleybird is our collaboration with the Clifton Worley Show. Clifton approached us about doing a “Worleybird” pedal and he was open to a lot of ideas. We’ve been wanting to make a choppy tremolo for a while, and it seemed like a perfect fit. Because like, helicopters are choppers. Get it?

We didn’t want to just do a single-use effect, so we added a Germanium/Silicon hybrid gain stage to the effect and put it on an order switch. This means you can feed the tremolo some more gain to get some interesting tremolo clipping, or boost the output volume going into your amp. The tones are quite different and you might prefer one over the other, but the extra versatility is really nice

The tremolo is based off of the mostly unknown Kay T1 tremolo effect that used a volume-pedal like design which allowed you to control the speed on the fly with your foot. It wasn’t the most useful feature, but the circuit itself is pretty bizarre and interesting. We made some modifications for increased reliability and control, but it stays pretty true to form and it’s a decently fast chopper! On the lower depth setting, you can get some smooth, amp like tremolo, and on the high end, it hits hard. We think it sounds pretty great with fuzz.

We always recommend isolated power supplies. If you daisy chain effects on one supply (ours can handle that despite being Germanium PNP powered), you may inject noise, ripple, ground loop hum, etc. This effect requires 9v, center negative power. In other words, the industry standard power supply.