The names of Spruce Effects’ pedals are inspired by nature, which is fitting. The San Francisco Bay Area company designs fuzz and drive stompboxes that help guitarists create tones that are true to who they are.

“We’re not so much interested in creating sounds that are novel and single-dimensional,” write Brian and Katie, the husband-and-wife team behind Spruce Effects. “But we are committed to creating sounds that will help you find your signature tone. Like many boutique pedal manufacturers, our beginnings were humble and began with a fascination for tinkering.”

Brian and Katie’s goal is to “create classic sounds in a custom, modern package that can be used for any situation.” They started out building kits and one-offs and performing mods before launching their company in earnest. Since then, they have endeavored to make pedals that sound as good as they look.

The two make every pedal themselves and custom design everything in-house. No boards are repurposed from pedal suppliers, parts are painstakingly sourced, and all the manufacturing is performed in the U.S.

In addition, Spruce offers DIY projects, including a Colorsound Overdriver clone of the pedal made famous by Jeff Beck and David Gilmour and a Univox Superfuzz clone of the stompbox employed by everyone from Pete Townshend to Adam Yauch of the Beastie Boys.

You can learn more about Spruce Effects’ current offerings in the descriptions and videos provided below. 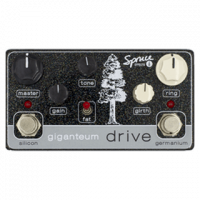 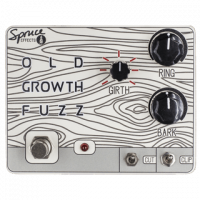 Spruce Effects - OLD GROWTH FUZZ
Inspired by variations of the classic muff and the haunting and sustaining old-growth spruce forests of Norway, this silicon fuzz is dynamic, heavy, and in your face. it responds to your guitar’s tonal qualities without masking your fundamental sound.
1st tap: info, 2nd tap: video
Ebay 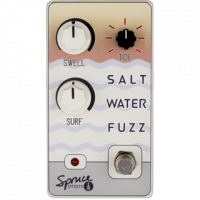 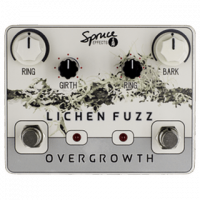 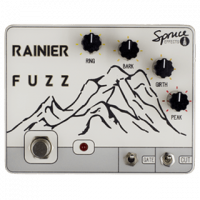 Spruce Effects - RAINER FUZZ
A nod to the classic, yet forgotten Jen Jumbo Fuzz, the Rainier Fuzz is a raw, loud and extremely fun fuzz to experiment with. The circuit has been modernized and stabilized, with the germanium gate circuit being controlled by a toggle and knob to allow you to insert or delete that part of the tone.
1st tap: info, 2nd tap: video
Ebay

Old Growth Fuzz
Inspired by variations of the classic muff and the haunting and sustaining old-growth spruce forests of Norway, this silicon fuzz is dynamic, heavy, and in your face. The Old Growth Fuzz responds to your guitar’s tonal qualities without masking your fundamental sound. An optimized-for-bass version that provides more low-end response at higher Bark settings is also available.

Salt Water Fuzz
A classic three-knob Tonebender spinoff, the Salt Water Fuzz was built for hot lead tones and sustaining chord riffs with excellent musical midrange. Its three perfectly matched NOS Germanium transistors create an excellent, higher gain fuzz tone. The Swell, Surf, and Tide controls are extremely interactive. Crank it for face-melting leads, or dial back the Surf knob (even all the way back) for subtle growl.

Lichen Fuzz Overgrowth
Spruce’s flagship effect features two independent effect circuits: a Lichen Fuzz on the right, and a Growth Ring boost on the left. When experimenting with germanium fuzz circuits on the breadboard, Brian and Katie wondered what it would be like to boost the fuzz with another germanium gain stage. The results were staggering. The effects can be run independently or together for intense, face-melting fuzz and boost tones.

Rainier Fuzz
A nod to the classic, yet forgotten Jen Jumbo Fuzz, the Rainier Fuzz is a raw, loud and extremely fun fuzz to experiment with. The circuit has been modernized and stabilized, with the germanium gate circuit being controlled by a toggle and knob to allow you to insert or delete that part of the tone. Now with a slightly revised circuit, the Rainier Fuzz offers the same heavy silicon fuzz sounds with a revised clipping section for more highs emphasis and a reworked Cut section for slightly more mids emphasis.

And here are some older, now discontinued models:

Yeti Machine Fuzz
The Zonk Machine was a short-lived Tone Bender MK1 derivative produced by a company run by an Englishman named Hornby Skewes. Though similar in sound to a MK1 Tone Bender, it had, to some ears, a more complex sound, including a slight oscillation and octave effect. The Spruce Effects rendition is a very limited run based on the rare 1965 original germanium version and features some modern upgrades. Note: There are no videos of the Yeti Machine Fuzz yet, but we’ve provided one of an original 1966 Zonk Machine.

Germanium Pelitaur
Leon from Pelican Noiseworks and Brian from Spruce started throwing around ideas about how to get new and unique sounds out of Pelican’s already awesome Pelitaur, a gnarly, nasty, unique fuzz with simple, interactive controls. After much iteration, Brian added his signature germanium touch to the Pelitaur circuit and incorporated a full-range germanium boost to the front end of the Pelitaur. The germanium sections of the new Pelican and Spruce brainchild feature hard-to-find NOS components. Note: There is no video of the Germanium Pelitaur, so we are providing one of the Pelican NoiseWorks Pelitaur.

Treemolo Fuzz
The Treemolo is the highest-gain fuzz Spruce has ever made. The tremolo effect is smooth and subtle, in the spirit of classic 1960’s tremolo sounds. You can use each effect independently (true bypass) or together at once, and even pick the order of the two. This effect was designed for The Tone Mob and is available only in the Tone Mob Store.