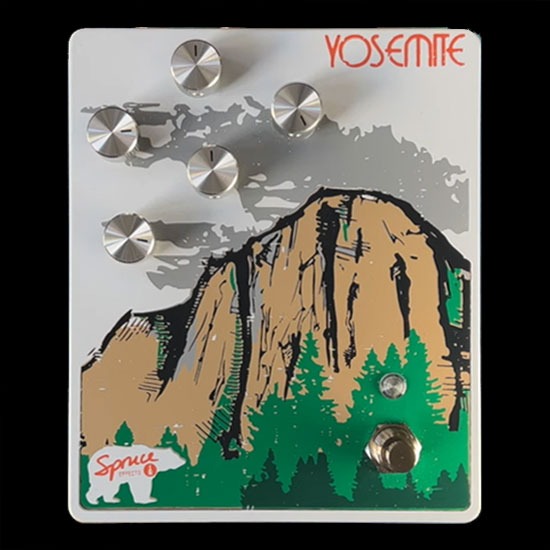 Those determined to get an “Analog” spring reverb will realize, at some point, that the format requires more space than any other analog pedal – unless they are happy with a weird, vaguely reverb-like BBD-based effect. This is due to the fact that the only way to produce a good-sounding reverb without resorting to digital technology is by using an actual spring inside the pedal’s case. That’s how the Spruce Effects Yosemite works – but that’s not all it does.

This pedal, which is actually a lot smaller than other ones with a real spring, also features a Germanium preamp that feeds both the spring and the output with enough volume to overload the spring tank and also your amp, pushing it into break-up territory at high output levels. This allows the creation of overdriven reverberated tones you don’t get from your regular OD-into-reverb configuration, producing sounds that are somewhat lo-fi but full of character.

The amount of reverb added to the dry signal is set by the bottom left control. Other knobs set the reverb’s size and tone.

This pedal is part of Spruce Effects’ Americana series, “an homage to the National Park system of the United States, featuring nostalgic artwork that pays tribute to WPA lithographs from the 1930s and 40s, as well as the beauty of the American landscape.”

Have a listen to the driven reverby sounds produced by the Spruce Effects Yosemite in the video below. We added it to our article about the best spring reverb pedals.