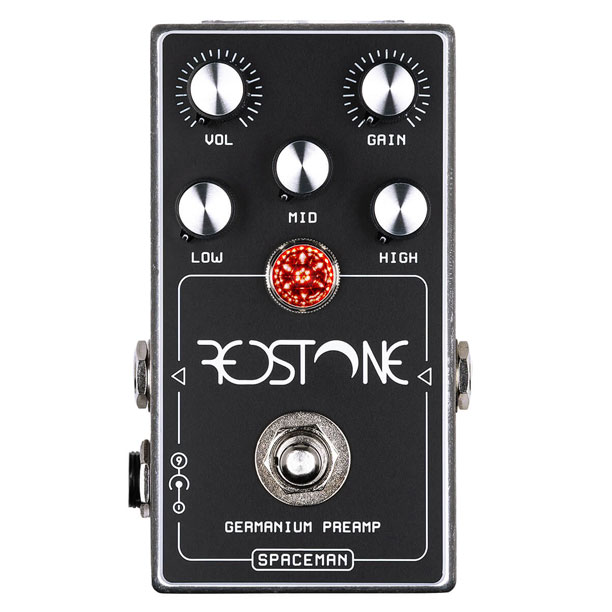 The Spaceman Redstone Preamp is a redesign of the company’s Mercury Harmonic Boost, which was also powered by a vintage NOS germanium transistor.

This device, also handmade, adds a 3-band EQ section, higher headroom when run at  12v and up to 40dB of gain, all within a smaller case compared to its older brother.

The controls are highly interactive, with the first gain stage and tone stack built to sound like the input stage of a tube amp and delivering rich and detailed harmonics.

The pedal works seamlessly as a clean or colored boost or an overdrive, lending dimension and muscle to your tone when pushed.

The Redstone is a flexible preamp with a 3-band tone stack powered by a vintage NOS germanium transistor. An homage to the early NASA launch vehicle, and an alternate reimagining of our Mercury platform, the Redstone is designed to be a stable and pervasive companion on your ventures across the cosmos of sound.

Using the Mercury as an inspiration to build upon, the Redstone offers additional control over gain, and tone compared to its older sister. The first stage and tone stack are built to closely emulate the input stage of a tube amp. The core gain cell is a discrete opamp with high headroom, capable of 40dB of gain. This beautifully integrated combination yields amazingly rich and detailed layers of harmonic sparkle, lending dimension and muscle to your tone when pushed.

The highly interactive tone controls offer plenty of bright bite, midrange clang, and thumping bass making the Redstone ideal for many purposes. When used at the beginning of your signal chain, it can function as a tweakable tone shaper, or even an overdrive. When used at the end of your pedal board the Redstone serves as an excellent line driver and boost. For those seeking a more transparent sound, the high and low controls can be lowered to minimum, with mid at noon, for a big natural rendering of your base tone. There’s also plenty of organic oomph for lower tuned instruments like basses and baritones to enjoy as well.

TRULY HAND CRAFTED
Hand-wired and built in Portland, Oregon, the Redstone features true-bypass relay switching with a soft-touch footswitch. On top of the cast-aluminum enclosure sits a durable, engraved vinyl faceplate and jewel indicator light. This pedal is built to last a lifetime, both on Earth or in the vacuum of space.