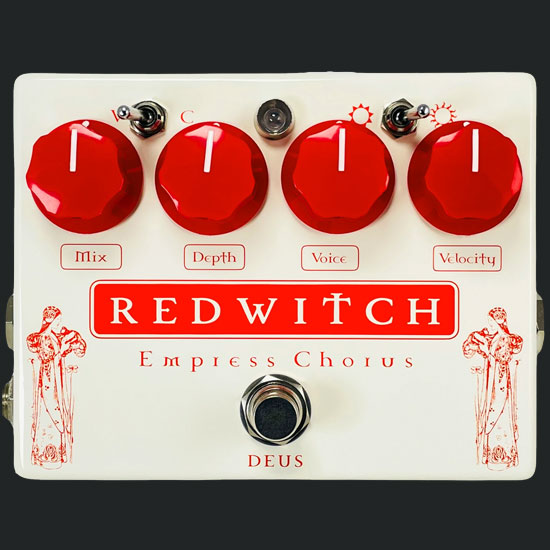 The original Red Witch Empress Chorus is one of the first stereo devices of this kind and was used exclusively by Andy Summers for all chorus sounds during the Police reunion in 2007.

The new Deus version adds a new “Dark” mode that simulates the high roll-off of the classic Boss CE-1, and extends compatibility to 15v PSUs for extra headroom.

Based on a new-old-stock MN3007 Bucket Brigade Delay chip, the Empress Deus Chorus V2 offers a wide variety of chorus and vibrato flavors thanks to its four knobs: Mix, Detph, Voice and Velocity.

While you’ll be easily able to guess what three out of four knobs do, the Voice control requires some additional introduction: it lets you change the delay time of the chorus, which allows creating infinite chorus variations – “from super-spanky sparkling clean to over-the-top sea-sick inducing, pitch bending wobble.”

Here’s the first video of the Red Witch Empress Deus, we added it to our comprehensive article about the best chorus pedals (mono and stereo).

Here are some videos of the regular “non Deus” version of it.

Red Witch’s most beloved pedal, The Empress Chorus, is back.

Now even better than before.

The original Empress Chorus was used exclusively by Andy Summers for all chorus sounds on the Police reunion in 2007.

The new Empress Deus Chorus gives you access to the exact same sounds and circuit in Andy’s unit and so much more. All analog, with a new-old-stock MN3007 Bucket Brigade Delay chip at it’s heart, the Empress Deus Chorus offers virtually every chorus flavor you could desire.

The new Empress Deus adds an extra feature, the option of switching the right-hand toggle switch to a much darker mode – allowing you to emulate the high roll off of the classic Boss CE-1.

Featuring the unique VOICE control of the original Empress, you are able to change the delay time of the chorus – allowing you access to an infinite number of chorus pedal sounds in one box – from super-spanky sparkling clean to over-the-top sea-sick inducing, pitch bending wobble.

The new Empress Deus also allows you to run the pedal from either a standard 9 volt DC supply, or, from a 15 volt supply allowing more headroom.

Every analog chorus sound you could ever desire in one, beautiful box.