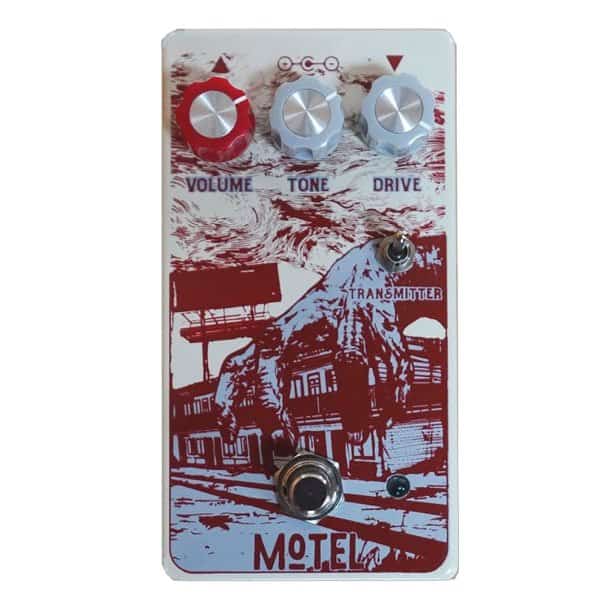 The  Pine Box Customs Motel is a RAT-inspired circuit that aims at widening the palette of tones produced by that popular distortion pedal. It’s also the first distortion pedal released by this Memphis-based company that mostly focuses on dirt boxes.

The Motel’s circuit features an internal voltage doubling circuit that doubles the voltage to 18v, allowing for wider headroom and dynamics.  The Transmitter toggle switch offers two distinct voices: one compressed and hard clipping (closer to the original RAT) and the other more open, uncompressed overdriven (reminiscent of tube breakup).

Other mods like the extension of the gain range and the taming of the mids, make this pedal sweet-sounding also at lower gain.

But no amount of words will ever describe precisely a pedal’s sound… hence, we leave you to the demo videos of it!

Motel is a versatile overdrive/distortion circuit based on a certain rodent that we all know and love. Motel was designed with a cleaner, more overdriven feel versus the original, but we decided to reel back in a little bit of traditional rodent sounds as well with the help of a toggle switch. This is the first distortion pedal that Pine-Box has released and we could not be happier with the result.

Here is where we stray away from the original.

-There is an internal voltage doubling circuit, utilizing a premium chip. This takes Motel from 7v to a very high headroom 18v power input.

-With the flip of a switch, Motel goes from a very compressed, hard clipping distortion circuit, to a much more open, uncompressed overdriven sound reminiscent of tube breakup. These two very distinct sounds to choose from  is what separates Motel from others.

-The gain range has been extended.

-We paid special attention to the low/high filtering and removed some of the mid focus. This really suits the lower gain and overdriven sound.

-We raised the input impedance to reduce tone sucking and keep the original sonic features of your guitar. With the input impedance more than doubled, this allows the chip to begin clipping and reduces the need for diode clipping. Giving this circuit and entirely new feel and sound.

-The buffered output control has been re-designed to act as sort of a post gain amplifier. This gives you a bit more gain and a lot more volume.

VOLUME- controls the overall output volume of the pedal

TONE- controls the high/low frequencies in the pedal

DRIVE- controls the overall gain of the circuit

TRANSMITTER- toggled up, you have a lower gain, louder, and less compressed circuit. Toggled down, you have a more traditional feel with a bit more gain on tap.

Built from start to finish in the USA