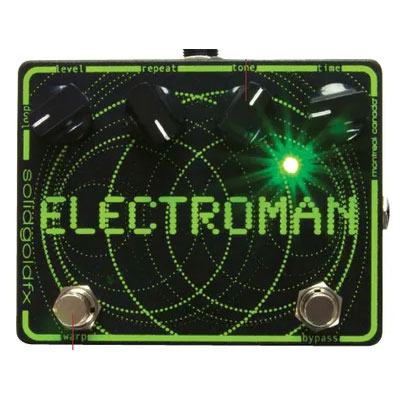 Less than a couple of months after relaunching their Apollo phaser and Stutterbox tremolo pedals, Canadian manufacturers SolidGoldFx have struck again with the new version of the Electroman delay (pictured) and the Surf Rider Deluxe reverb.

The cool thing about this Electroman is its Warp button. This allows you to instantly turn up the Repeats into a self-oscillating feedback, which works great for swells and mesmerizing transitions. Once you let go the button it goes back to your normal settings of delay. An interesting consideration is that, with lower settings of Tone and Repeats you will get a slower-growing effect – as opposed to using the delay set to its full bright wall of sound, which drives it a little more to the edge. The Electroman also has an effects Loop to plug in other effects only to your delayed signal. – Andrés Marín