Pedal Update: SolidGoldFX If 6 Was 9 MKII 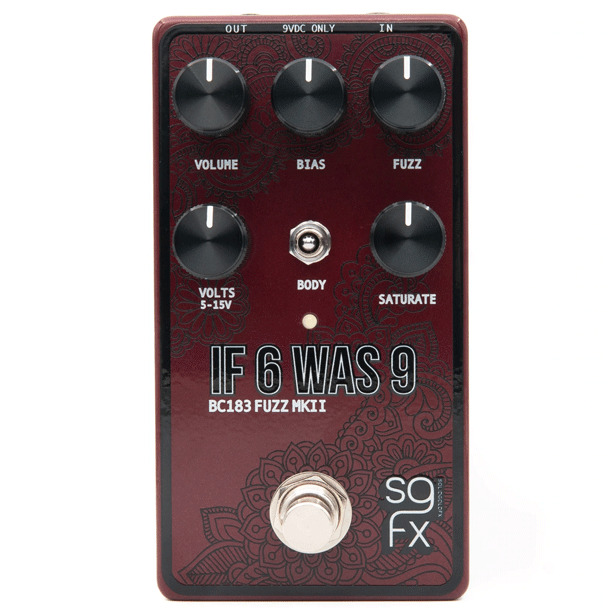 The SolidGoldFX If 6 Was 9 MKII is a take on the Fuzz Face using silicon BC183 transistors, which are considered to be less scooped and muddy than germanium transistors, but not quite as harsh and jagged as other silicon options. It also includes a bias control which can vary the voltage going to your pedal a la Eric Johnson, whose signature sound came from running his Fuzz Face off a partially-drained 9-volt battery.

MKII adds a variety of new features aimed at bringing this vintage-inspired design into the modern age:

Have a listen to this fuzz in the video below, we added it to our article about the best Fuzz Face pedals and variants.

SolidGoldFX If 6 Was 9 MKII, Builder’s Notes

If there’s one pedal that captures the history of sonic rebellion and the soul of classic rock, then the Fuzz Face is it. Bold and raunchy when fed power chords, velvety smooth and angelically soaring when presented with lead lines and with an almost too-good-to-be-true volume knob cleanup, which allows for the best clean tones you’ve ever heard, the Fuzz Face is truly a multi-faceted tonal treasure. Jimi Hendrix, Eric Johnson, Stevie Ray Vaughan and Pete Townsend all carved their undying legacy with this iconic fuzz machine and with our If 6 Was 9 MKII, you can instantly tap into those legendary tones or go far beyond to discover your own saturated signature sound.

It’s been at least 10 years since we launched our original If 6 Was 9 BC183 and improving on this solid design was no small feat. SGFX’s pedal pays tribute to all the players who contributed to the pantheon of rock, with specially selected components to get your mojo working. We put two BC183 devices in each one, which is widely regarded as a happy medium between the potentially mushy compression of germanium and the brash sawmill-like fuzz of silicon. The tone of the If 6 Was 9 MKII is just that – smooth and refined, without falling apart on chords and with loads of sustain on single-note work. The MKII includes all the soulful fuzz tones of the original BC183, but incorporates a variety of new features aimed at bringing this vintage inspired design into the modern age.

What really sets the new If 6 Was 9 MKII apart is the power supply. Fuzz Face tone has been whittled down to such a precise science that players now know what voltage at which they prefer their Fuzz Face to be run. Eric Johnson famously kept a box full of batteries drained to various degrees. We have equipped this fuzz with a variable voltage pump, supplying anywhere from 5 to 15VDC from a single 9V power source. No need for a box full of questionable batteries anymore, just set the knob to your preferred supply voltage and get as much fuzzy compression or meaty breakup you desire consistently, every time.

This, in conjunction with the bias control, will allow for any shade of fuzz ranging from gated and sputtery, to smooth and dynamic, then all the way to bold and punchy. The new saturate control trims the circuit’s input for better cleanup, signal chain integration or impedance matching, ideal for use with a wah pedal. Finally, soft-touch true bypass switching and top jacks really bring this fuzz face into the 21st century.

That was a lot of tech babble, we know. At the end of the day If 6 Was 9 MkII is just here to help you with what you do best: plugging in and rocking out!