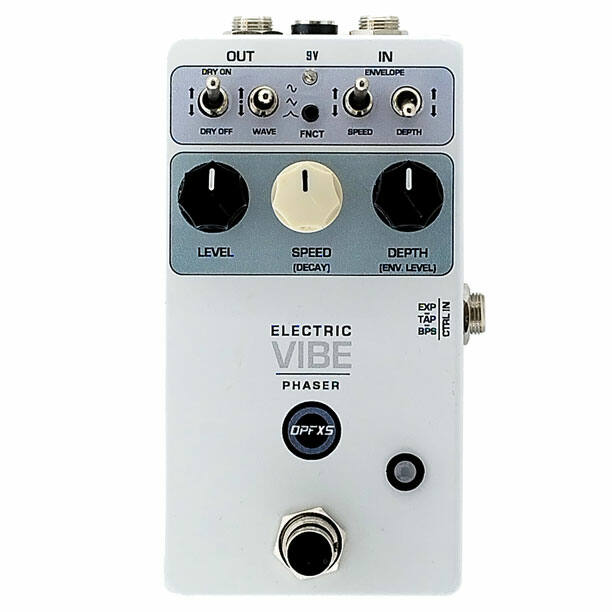 Hailing from La Spezia, Italy, the OPFXS Electric Vibe is a peculiar (and neat-looking) take on the Uni-Vibe and the phaser, at once.

It features a design similar to the classic Uni-Vibe, an optical circuit that modulates the signal by going through four phase shifting stages, but it can apply the effect not just through an LFO but also through an Envelope (at the same time), which means that the dynamics of your performance can affect the phasing.

The first toggle switch on the top left allows access to the pedal’s two modes (Phaser when the  Dry switch is On, and Vibrato when its set to Off).

The LFO can follow 3 waves (Sine, Triangle, and Pulse, selected via the second switch) and be controlled via the Level, Speed, and Depth knobs. A Funct(ion) push knob allows access to alternative controls for the latter two controls, to set the Envelope Decay and Level (the phaser will behave like a regular LFO phaser is these settings are at zero).

Two extra toggle switches on the top right activate the interaction of the Envelope with the LFO’s Speed and Depth, so that the modulation rate/amplitude can vary according to rhythmic accents.

We added this pedal to our article about the best phaser pedals.

The Electric Vibe is an analog phaser/vibrato pedal which combines the classic vibe tones with additional unique features.

Electronically it’s inspired by the Univibe (TM) circuit and features a similar optical system to modulate the signal by going through four phase shifting stages.

The ENVELOPE is probably what makes it stand out the most. When envelope functions are engaged you can get dynamic responsive modulation which accurately follows string picking and chord strumming intensity. What does it mean after all? For example with SPEED and/or DEPTH envelope engaged the modulation rate/amplitude can vary according to rhythmic accents, allowing for either subtle or dramatic changes in the effect output. It’s really like you are “playing” the effect!

The DRY ON/OFF toggle switch allows to select between phaser effect (DRY ON) or vibrato (DRY OFF).

3 LFO wave types can be selected through the WAVE switch: SINE, TRIANGLE and PULSE. The SINE wave, by default, is input signal triggered for perfect in-time modulation. The Sine LFO triggering can be turned off too.

The FUNCTION micro-switch allows to access secondary functions of DECAY and ENVELOPE LEVEL as well invert the ENVELOPE ramp.

An auxiliary input allows to connect an EXPRESSION pedal, a momentary switch for TAP TEMPO, a momentary/latching switch for bypass or control the LFO rate from a control voltage. The selection is made internally with a DIP switch.