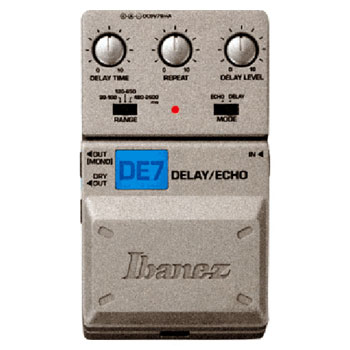 The Ibanez DE-7 Delay/Echo is part of Ibanez’s Tone-Lok series of effects. At the time of their release, these pedals were geared toward the upcoming Nu-Metal scene but they have found their way onto the pedal boards of many different musicians due to their sturdy construction and great sounds.

The Tone-Lok series boasts its own secret weapon. How often have you spent hours dialing in a great pedal sound, only to lose it during transport to a gig or studio, or accidentally nudge one of the buttons onstage? This can be especially problematic for time based effects, where precision must be used to ensure the delay stays in time. Knowing this, Ibanez developed the Tone-Lok system. Each knob can be pressed down, locking it into place and saving your precious settings! Pressing the button again releases the mechanism, allowing you to change as needed.

The Delay setting is a basic digital delay sound. The delays are crisp and pristine, and similar to the Boss DD line. The Echo setting on the other hand is an analogue delay simulation, in which the repeats become darker and quieter. While it lacks the warmth of a Memory Man or Carbon Copy delay, it can also be purchased for half the cost. With the repeat knob on 10, the Echo setting can be overdriven into self oscillation, which can be controlled by sweeping the delay knob for different pitches. As many guitarists seek analog delays simply for this effect, the DE-7 is a great alternative to a higher-priced unit.

Most of the best settings fall within the 120-650 ms range. The 30-160 ms range is adequate for rockabilly or quick slapback effects. Setting it to the 480-2600 ms setting yielded Robert Fripp style looping similar to his “Frippertronics,” especially on the Delay setting where the notes don’t decay quickly.

While it lacks tap tempo, a little discipline (and maybe a Sharpie) can yield rhythmic delays similar to The Edge on every U2 song.

Whether you prefer your delays soft and subtle or loud and in your face, you are sure to find some great psychedelic sounds in the Ibanez DE-7. – Pat Durkin